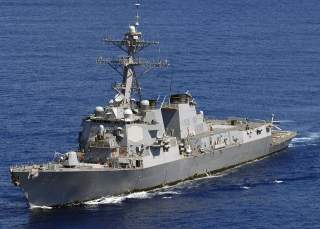 The United States Navy has awarded Huntington Ingalls Shipbuilding a contract modification to build the service’s first Flight III Arleigh Burke-class (DDG 51) guided missile destroyer. The new ship will be named Jack H. Lucas (DDG 125), which is the last of five destroyers the company was originally contracted to build in June 2013.

“We have proven our success in the DDG 51 class over the past 30 years, and our shipbuilders are ready now to build the first Flight III ship,” Ingalls Shipbuilding President Brian Cuccias said in a statement.

“This will be the 35th Aegis destroyer we will build for the U.S. Navy in what has been one of our company’s most successful programs. These ships are in high demand, and this Flight III ship will be the most capable DDG 51-class ship ever built.”

The Navy is not releasing the value of the flight upgrade modification contract.

“As this award represents the first DDG 51 Flight III baseline contract award, and the Navy expects to release a competitive solicitation for additional DDG 51 class ships in the Flight III configuration in future years, the contract award amount is considered source selection sensitive information,” the Defense Department said in a June 27 statement announcing the contract award.

To support the new Flight III systems, the new DDG-51 will have much greater installed power and cooling capacity. As part of those changes, the ship will receive new  4MW Rolls Royce electrical generators in place of the traditional 3MW generators found on previous ships of the class. The Flight III configuration also replaces the ship’s air conditioners with much more powerful units.

According to Huntington Ingalls, the five-ship destroyer multi-year procurement contract allows the company “to build ships more efficiently and creates greater strength and stability in the important supplier base.”

It was previously expected that the U.S. Navy would award rival Bath Iron Works the contract to build the first Flight III ships. It is not clear why the service has changed course to award Huntington Ingalls the contact for the first of the new Flight III destroyers.

The Flight III DDG-51 ships are set to become the backbone of the Navy’s fleet until the service designs and builds a follow-on Future Surface Combatant to replace the Arleigh Burke-class destroyers and the Ticonderoga-class cruisers. The Flight III came about after it became clear that the Zumwalt-class destroyer was not going be well suited to dealing with the then-emerging ballistic missile threat. Moreover, the service could not build the Zumwalt-class destroyers in large numbers due to their exorbitant cost.