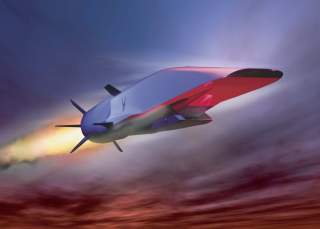 Spurred by developments in Russia and China, the U.S. Air Force is taking steps toward acquiring a hypersonic surface-to-air missile capable of traveling faster than Mach 5.

For more than 20 years the Air Force — not to mention other U.S. government agencies and private industry — have been experimenting with hypersonic technology. But as of mid-2017 that experimentation hasn’t translated into a working weapon.

“Qualified vendors must be skilled in design, qualification, component/subsystem testing of the critical elements of the hypersonic missile in representative operational conditions,” the notice explains.

A hypersonic munition speeding along at least five times the speed of sound offers huge advantages over existing — and much slower — weapons. High speed makes a hypersonic missile difficult to intercept or dodge. The kinetic energy of a Mach-5 munition lends it tremendous destructive power.

The Defense Advanced Research Projects Agency, the Air Force and Army have all tested “boost-glide” vehicles that launch atop rocket boosters then glide, unpowered, at hypersonic speeds. Most of the test flights have ended in failure.

DARPA, NASA and the Air Force have also trialed powered hypersonic weapons, most notably the Boeing-made X-51 Waverider, a two-ton, 25-foot-long, two-stage vehicle with a detachable rocket booster and its own, built-in scramjet engine. The booster accelerates the vehicle to Mach 4.5, at which point the air-breathing scramjet takes over and nudges the top speed past Mach 5.

As a sort of follow-on to the X-51 effort, the Air Force, NASA and an Australian government test agency plan to experiment with a more controllable hypersonic vehicle that the testers hope will also be cheaper — no more than $10 million per vehicle — and more reliable.

Flight tests of that co-called “HiFIRE” vehicle could begin in Australia as early as July 2017, and could support the Air Force’s current effort to acquire a hypersonic munition for routine use.

“This new weapon system must be designed and analyzed for rapid development and fielding,” the June notice stresses.