Hypersonic Weapons: Everything You Need to Know About the Ultimate Weapon 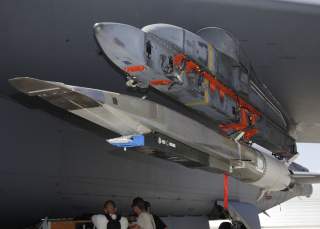 The US wants to stay in front of China with hypersonic weapons able to travel at five-times the speed of sound and destroy targets with a "kinetic energy" warhead.

The Air Force and Australia fired an experimental hypersonic weapon into the Australian skies -- traveling at speeds faster than one-mile per second, a Pentagon report said.

"This was just the latest in a series of tests of the HiFIRE 4, which was also tested in Hawaii and Norway in 2012. While the designed speed of the hypersonic missile is faster than that of sound, its advantage lies in its enhanced maneuverability and smooth flight path, which is much harder to track than that of traditional missiles," the Pentagon report said.

A recent Air Force Studies Board report identified that the U.S. is not alone in its quest for this increased speed

The report said that China and Russia are already flight testing hypersonic weapons, and several other countries have shown interest in pursuing many of the underlying technologies for hypersonic flight.