Hypersonic Weapons: An Idea So Crazy It Just Might Work 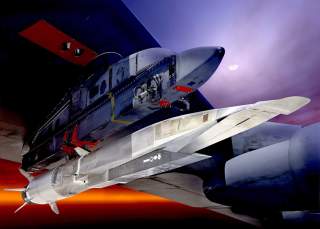 Last month, Guy Norris reported for Aviation Week & Space Technology on how the Chinese government has revealed a national plan for hypersonic aircraft research. On this side of the Pacific, people have been getting stressed. Norris's earlier report in February covered a classified assessment within the US government that warned of possible breakthroughs in Chinese hypersonic technology, and of how American efforts were “lacking urgency.” Norris, Joe Anselmo, and Graham Warwick even produced a Check Six podcast episode on the issue. But during the previous administration, the Army, Navy, and Air Force Departments did all seem to be talking up new ideas for fast-moving weapons. So does the Pentagon need to be putting more money there? Does any other defense ministry? Perhaps, but sometimes necessity is truncated by feasibility. For with hypersonics, the tactical advantages are great, but so are the technical challenges.

There are at least three ways to make weapons go hypersonic: making a missile that flies very fast, firing a very skinny projectile with a discarding sabot from a cannon, or just firing a projectile from a railgun. As Norris noted, American research on hypersonic missiles has been underway in “starts and stops” since 1947. Tank guns have been firing discarding sabot rounds since the 1940s. When “the long rod” exits the barrel of Rheinmetall’s famous 120 mm L/44 or L/55, the main guns for Abrams and Leopard 2 tanks, it’s moving at about Mach 5. Not much stands in the way of that. It’s perhaps no surprise that Will Roper's Strategic Capabilities Office at the Pentagon has recently gotten enthused about equipping longer-range naval guns with even longer-range “Hyper-Velocity Projectiles” (HVPs). Railguns have been discussed for decades; of late, BAE Systems and General Atomics have each been working on prototypes, and DRS has been working on the necessary power systems.

For this reason, the Wall Street Journal recently called the Navy’s proposed Mach 7 railgun projectile a “battlefield meteorite with the power to blow holes in enemy ships and level terrorist camps.” (After all, in The Expanse, when the Martians divert power to the railguns, you know they're getting serious.) However one attains those kinds of velocities, the kinetic energy alone is enough to do great damage. Hypersonic weapons are also very difficult to intercept; just note the herculean efforts expended on anti-ballistic missile defense: shooting the things down is considerably more expensive, and that leads to unfavorable economics against the inbounds. But for all that awesomeness, there are at least eight serious issues with going so very fast.

Sensing. At high Mach numbers, aero-structures become encased in plasma sheaths—envelopes of disassociated nuclei and electronics, of high conductivity, that interfere with all electromagnetic transmissions. Think about how many astronaut movies feature those tense few minutes when mission control can’t talk to the capsule during atmospheric reentry. Making missiles or munitions that don’t fly blindly hypersonically requires datalinks and sensors that can operate through that mess. The US Air Force started looking for a way to address the problem in the late 1950s. It’s still far from solved.

Control. With direct fire, one might not need much guidance for hypersonic weapons, as the atmospheric effects are insignificant. But elevate the barrel, and every hundredth of a milliradian of deviation from true means a meter off at 100 kilometers range. Get anything wrong about the ballistic calculations, and terminal guidance is required from those really robust sensors. Against maneuvering targets at long range, like ingressing aircraft, that’s even more important. The problem is that Mach 7 tends, as a former railgun program manager once told me, to “burn the control surfaces off the weapon” as it flies. Move a missile faster and further, and the problem gets worse. Beverley McKeon of CalTech has recently suggested (and patented) the idea of “morphable… ionic polymer metal composites” to control flight at those speeds. That sounds awesome, but not of an advanced TRL.

Air resistance. Perhaps fortunately for projectiles, those speeds don't last very long. Without propulsion, on long flights, fluid dynamics eventually return the round to its aerodynamic terminal velocity. That means that at long ranges, a railgun or cannon round will be arriving at roughly the speed of any conventionally fired round. At that point, the added smash of hypersonics would require the constant propulsion of a missile. That, in turn, is expensive. There’s a reason that passengers aren’t flown across the Atlantic in Concords anymore; those speeds were never economical for large loads.

Highly focused effects. Consider a 127 mm solid slug fired from a railgun at Mach 7. That projectile could put about 90 mega-joules of kinetic energy on a target at close range. That’s about the energetic output of 21 kilograms of high-explosive fill, or roughly what a 127 mm HE round would carry. But for the long range, instant gratification, and general awesomeness of the railgun concept, one might wonder what’s wrong with today’s basic five-inch. The benefit is that all that energy is focused on the point of impact. Like a tungsten penetrator from a tank gun, that tends to go through most things, making for an incredible bunker-buster. The drawback is that the destruction is very localized. Contrary to the Wall Street Journal’s description, firing railgun rounds at a camp would mostly put deep holes in the ground, and just occasionally splatter a terrorist if one were unfortunate to be standing in the wrong place.

Barrel wear. The US Navy’s five-inch gun barrels have a service life of about 8,000 rounds, courtesy of prime contractor BAE Systems and the depot in Louisville. The Navy currently thinks that it can get 400 rounds out of a railgun, but the service is hoping for a few thousand. The lower figure is just getting close to operationally interesting. The higher combustion temperatures needed for propelling those HVPs would also circumscribe the barrel lives of the Navy’s existing five-inch guns.

Power. Shooting with chemical propellants from the five-inch is appealing because it’s right now the only option. Only three warships afloat anywhere have enough power to fire up a big railgun: the US Navy’s three Zumwalt-class destroyers, which each have capacity for 75 megawatts of electrical output. The trouble is that each already has two 155 mm Advanced Gun Systems, which throw rounds 83 nautical miles (assuming that the Navy actually buys the rounds). As of today, there’s no other answer to the power problem in the procurement pipeline.

Now, for a moment, suppose all these problems were addressable. Hypersonics, after all, are clearly attracting interest. The Mitchell Institute studied the hypersonic issue last year. The American Enterprise Institute studied it this year. The Congressional Research Service has released its own secret report. The development of relatively inexpensive, controllable, hypersonic projectiles might actually “change the paradigm of missile defense,” and shore bombardment too. If guns could be so useful, navies might not build fleets of air defense ships with 50 to 100 relatively expensive missiles, but just one or two guns. They might, instead, build ships like the old French anti-aircraft cruiser De Grasse, which sported 16 (yes, sixteen) five-inch guns along her 12,350 tons when she was completed in 1954. My Marine Corps friends are doubtlessly perking up at the idea of clouds of precision-guided five-inch raining down on their enemies. Perhaps it’s an idea so crazy it might just work. Or, there’s maybe a reason no one has tried it yet.