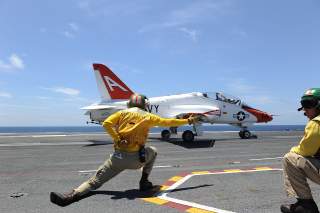 The United States Navy is taking steps to mitigate a series of hypoxia-like events onboard its Boeing F/A-18 strike fighter and T-45 jet trainer fleets. However, the service has not discovered the root cause of what is causing the problem.

Even after the Navy released the results of a comprehensive review that Vice Chief of Naval Operations Adm. Bill Moran directed Adm. Scott Swift, commander, U.S. Pacific Fleet, to conduct this past April, the root cause remains a mystery.

The Navy has seen a “surge in physiological episodes (PEs)” occurring within the naval aviation fleet going back to last fall in the F/A-18 community and in the T-45 community. Indeed, the problem had gotten so acute, that Navy instructor pilots refused to fly the T-45 advanced jet trainer due to concerns with the aircraft’s On-Board Oxygen Generation System (OBOGS) in April.

“We have had physiological episodes in naval aviation as long as we have has high performance jets,” Moran told reporters during a conference call on June 15.

“What we are see though is a trend in the wrong direction. More than we expected, and we don’t understand fully why that is.”

Moran notes that the report identifies that this is a very complicated problem encompassing both technological and physiological aspects.

In some cases, such as the Hornet, Super Hornet and EA-18G Growler communities, hypoxia has resulted due to problems with cabin pressurization, but in other cases, the problem has been due to the OBOGS.

Meanwhile, the PE problems in the T-45 are largely due to the OBOGS from what the Navy’s investigation has shown thus far.

Moran—to his considerable credit—took responsibility for the Navy’s leadership failing to act quickly to address the OBOGS issue.

“Our normal response time in reacting to trends was insufficient to react to the pace of how quickly these issues were emerging in both the fleet and in the training command,” Moran said.

“But we were especially slow to react to what was going on in the T-45s.”

Moreover, the Navy’s leadership failed to communicate with its naval aviators and student naval aviator communities.

“We could have and we should have done better at communicating what we were learning and what we were doing about it,” Moran said. The service is making changes to address those shortcomings.

The Navy is implementing steps to mitigate the problems with the OBOGS and get the T-45 community back up flying. Student pilots will be flying in the “next couple of weeks”, Moran said.

As more T-45s are modified with various fixes to their life-support systems, the training bases will be able to ramp up to their full flying syllabus by the end of the summer.

- Establish a single, dedicated organization to lead Naval PE resolution efforts. This temporary organization should be headed by a Naval Aviator Flag/General Officer, embrace the "unconstrained resource" approach and fully incorporate all stakeholders.

-Execute a multi-faceted approach to improve ECS reliability, particularly on the FA-18. This effort must address component reliability, system inspections and testing.

-Embrace and resource a methodical PE root cause corrective action process for each aircraft under the single, dedicated organization tasked to lead PE efforts. Additionally, standardize and improve the PE investigation and adjudication process.

Nonetheless, despite Navy’s mitigation efforts, the service has no idea what the root cause of the PE issue is.

“We don’t know the root cause, we’re actively working with Boeing... We’re doing a very through root cause analysis project with Boeing on the F/A-18s we have for the pressurization and OBOGS things,” Moran said.

“We do not know what the root cause is in the ECS [environmental control systems] or the OBOGS systems yet, but what we do know is what makes an OBOGS system effective and so we’re making sure we have things in place that should generate clean dry air at the right volume and pressure.”

The T-45 is a more complex issue—the jet is an antique that lacks many of the sensors embedded in more modern aircraft.

“Unfortunately, there aren’t enough sensors resident within that system, which is fairly old, we’ve been flying that airplane for a while, that has been able to give us the kind of data we need to determine whether the system is operating the way it was designed to operate,” Moran said.

According to Moran, the Navy is working on developing sensors to measure blood oxygen, blood pressure and other physiological measurements to address that issue. Without sufficient data for the Navy’s aerospace physiological experts to work with, the service’s efforts will come naught. Fortunately, the Navy’s leadership recognizes that fact and is taking the appropriate steps to address the problem.

But if the Navy’s mitigation efforts and various fixes to its aircraft fail, the service is working with the contractor Cobham to develop a next-generation OBOGS to replace the current hardware.

“I think we have some tremendous talent resident within the Navy on that, but we’re also reaching out to multiple organizations where that expertise lies,” Moran said.

One such organization is the Air Force’s F-22 Raptor community, which suffered a series of PEs during 2011—as I reported for Defense News and Air Force Times at the time.

The Navy is doing everything it can to mitigate the OBOGS issue—but it is a vexingly difficult problem. If all else fails, the Navy may have to revert to liquid oxygen bottles that were prevalent before the advent of OBOGS.