I Just Toured the U.S. Navy's Most Advanced Stealth Warship Ever 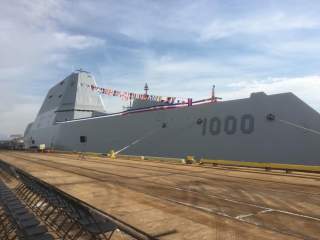 The United States Navy is set to formally commission its first DDG-1000 stealth destroyer into service this Saturday as USS Zumwalt in Baltimore, Md. The National Interest was among a select group of publications that was afforded an opportunity to tour the futuristic new vessel and talk to its crew. Though the Navy is only building three of the 15,500-ton warships—the new vessels are pioneering technologies that represent the future of the surface fleet.

“This is a mandatory stopping point to the future,” Capt. James Kirk, Zumwalt’s commander said on Oct. 13 before a small group of reporters. “You must come through here.”

While Zumwalt is being commissioned on Saturday, the ship will not be ready for war for some time yet. The next steps for Zumwalt and her crew will be to conduct testing and additional trials before heading to San Diego where workers will complete building her combat systems. Until the yard in San Diego completes work on Zumwalt, the vessel will not be combat ready.

Navy officials serving onboard are uncertain if Zumwalt will be able support the SM-3 and SM-6 variants of the Standard missile—though her Mk57 advanced vertical launch system tubes can physically hold the weapons. One of the reasons the Navy dropped plans to build additional DDG-1000 destroyers was because the ships SPY-3 X-band multifunction radar is not capable of performing the anti-ballistic missile defense role. However, the ship will be able to launch Tomahawk cruise missile, Evolved Sea Sparrow Missiles, Standard SM-2s and anti-submarine rockets from its 80 missile tubes.

However, Zumwalt’s main armament is a pair of 155mm naval artillery pieces which can lob GPS-guided shells at ranges of 63 nautical miles. The ship carries over 600 rounds of 155mm ammo. Zumwalt and her sisters—though they are multirole ships—were originally designed primarily as land-attack vessels and to support Marine landings during amphibious operations. In addition to her two massive artillery pieces—which are usually concealed to maintain stealth—Zumwalt is armed with a pair of Mk46 30mm cannons for short-range self-defense.

The idea behind Zumwalt was to build a ship that could approach the enemy’s littoral waters and survive. Thus, the ship was designed with stealth in mind, Kirk described the ship as having one-fiftieth of the radar cross-section (RCS) of a DDG-51—which itself has one-fiftieth of the Ticonderoga-class missile cruiser. It also has a host of other signature reduction measures in terms of infrared and acoustics, Kirk said. Navy officials have previously suggested that Zumwalt has the RCS of a fishing boat.

Zumwalt also has a large hangar bay and a large flight deck—with room for a pair of MH60R Seahawks or one MH60R and three vertical takeoff drones. Indeed, a mockup of a Northrop Grumman MQ-8C Firescout was on prominent display on the flight deck during The National Interest’s visit. Below decks, the ship has a launch bay for a pair of 11m rigid-hull inflatable boats (RHIB) and single 7m RHIB according to the officer who was guiding the tour.

Zumwalt is roughly one-third larger than the Arleigh Burke-class (DDG-51), but her crew complement is only 147 sailors. Unlike previous generation warships, Zumwalt and her sisters Michael Monsoor and Lyndon B. Johnson are highly automated and use a completely new type of computer architecture. Indeed, the bridge—which has room for six watch officers—looked like a set from a science fiction movie.