I Met an ISIS Fighter in an Iraqi Prison 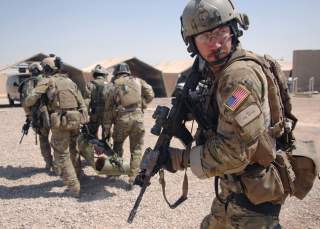 Checkpoint guards in ISIS territory are known for their ruthlessness and intolerance. It’s hard for me to reconcile this image of a radical enforcer with the young man who sits before me in shackles, worn down by countless interrogations.

In a war-scarred jail in Kirkuk, in northern Iraq, I meet a 27-year-old former Islamic State fighter.

He claims he intentionally left the terror group in order to seek medical treatment. While trying to pass into Kurdish territory in October 2016 via a checkpoint in Taquq, he told Kurdish federal police that he was a member of ISIS. In effect, giving himself up.

Charged by the Kurdish government with being a terrorist, Abdullah is awaiting trial when I meet him in mid-August. Prison officials lead me inside a small room. Abdullah appears wearing handcuffs and a black scarf as a blindfold.

The officials remove the blindfold. Abdullah is nervous but friendly. His face is pale from a lack of sun. He shakes my hand and raises his own hand to his chest, as is the custom in much of the Middle East.

Abdullah tells me he’s a native of Hawija. His life before joining ISIS at around the age of 25 was unremarkable. I ask him what he did for a living. He says only that he was a high-school student.

This makes sense. Many young men in Iraq and Syria join ISIS not out of true religious conviction or devotion to any cause but for economic reasons. Opportunities for unskilled and uneducated youth are almost nonexistent in much of Iraq. At the terror group’s peak, the pay for an ISIS fighter exceeded the average wage of a normal laborer.

Abdullah says his view of the West — the United States in particular — crystalized during the U.S.-led invasion and occupation. “We think that they are unbelievers and that they occupied our country and that they go into any countries they want and occupy them,” he says.

“I became very religious and wanted to lead an Islamic life,” Abdullah continues. “In a mosque I was convinced by an imam that joining ISIS was a devout thing to do. I was recruited by ISIS members in my neighborhood.”

Abdullah says no other members of his family joined ISIS. He admits that his family knows he’s been imprisoned — but not where. During his two years as a member of ISIS, he filled two different positions. First, as a guard at a checkpoint, and then as an inspector in a marketplace — both in Hawija.

Checkpoint guards in ISIS territory are known for their ruthlessness and intolerance. It’s hard for me to reconcile this image of a radical enforcer with the young man who sits before me in shackles, worn down by countless interrogations.

I ask how he’s been treated in prison. “Okay,” he says, surely mindful of the prison officials sitting beside him.

“I left ISIS because they treat people badly,” Abdullah says. “They try to control every part of the life of people who are under their control, you have to ask them permission to do anything and if you have any relationship with people who are not members of ISIS, they execute you.”

“I never saw an execution with my own eyes but I did see the bodies of people who had been killed,” he adds. I ask if ISIS’s creed is consistent with Islam. “No,” he says, “it is not according to the Quran.”

Our interview ends after 20 minutes. “I want to tell the world that I really regret it,” Abdullah says in closing, “and I want to tell people that this road is the wrong way and a dead end and useless.”