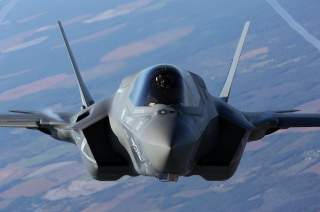 The Atlantic Trident 17 war games, which took place at Joint Base Langley Eustis in Virginia—the home of the USAF’s elite 1st Fighter Wing—included not only the F-35A, but also the  Lockheed Martin F-22 Raptor, the French Dassault Rafale and the RAF’s Eurofighter Typhoon. The smaller scale of the exercise—compared to the USAF’s massive Red Flag war games at Nellis Air Force Base, Nevada—mean that the RAF was freer to experiment with how best to integrate fifth-generation fighters such as the F-35 with conventional fourth-generation jets such as the Typhoon.

“We’ve started to develop tactical lessons with F-35,” Wing Commander Chris Hoyle, commanding officer of the RAF’s 1(Fighter) Squadron told me during Exercise Atlantic Trident 17 at Joint Base Langley Eustis in Virginia last week. “This is a slightly smaller scale exercise which really allows us to build a much better idea of how we’re going to employ the F-35. For the U.K., it’s giving the Royal Air Force a sneak preview of what we can expect when the U.K. armed forces take delivery of the first frontline squadron of F-35s—and so far it’s looking incredibly promising.”

While it is very beneficial for the RAF to train together with the U.S. Air Force’s operational F-35A fleet, the British are buying the short takeoff/vertical-landing (STOVL) version of the Joint Strike Fighter. The F-35B—as the STOVL variant is designated—has some different characteristics compared to the conventional F-35A variant, the most obvious of which is the ability to takeoff from short unimproved austere airstrips and a capability to land vertically. However, the F-35B trades range, payload and maneuverability to achieve that.

Another difference is that while the U.S. Air Force has declared the F-35A operational with an interim Block 3i hardware and software configuration, the RAF is waiting for the final Block 3F version before it field an operational unit.

“That the platform is this capable at this stage is really promising. It’s a great sign for the future,” Hoyle said. “There are obviously slight differences with the F-35B we’re getting, but I am really excited about the future of the U.K. fast jet capability.”

The British are already training on the F-35 and are also participating in the jets’ operational test and evaluation. The early involvement of British means that as America’s closest military ally, the U.K. will have less of a jump to make when flying in combined operations. “Integrating these platforms together is key,” Hoyle said. “Integration is not something you do once and then it’s done, it’s a continuous process... this is something that evolves and develops.”

Continuous practice should help to reduce the interoperability issues that often crop up when air forces from different nations fly together. Having a common platform in the form of the F-35 only makes it easier for the U.S. and its NATO allies to share tactics, training and procedures. It’s no longer a question if, it’s matter of when and how.