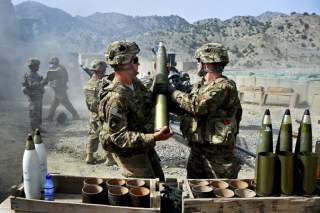 Since the Islamic State (ISIS) rose to prominence in 2014 and captured huge swaths of territory in both Syria and Iraq, conventional wisdom in Washington has held that President Barack Obama contributed to its rise by his “failure” to keep 10,000 American troops in Iraq at the end of 2011. This narrative is based on emotion and conjecture which ignores the military and political realities that existed in Iraq in 2011.  The belief that 10,000 American training and support troops could have prevented entire Iraqi divisions from melting in the face of several thousand irregular ISIS troops was never realistic. But perhaps a better example of why those troops would not have prevented the rise of ISIS is to look at what the troops that were kept in Afghanistan proved unable to do.

There are currently approximately 13,000 U.S. and NATO troops stationed in Afghanistan.  In October of last year there were still over 34,000 troops. Yet even these tens of thousands of soldiers had no impact whatever on the resurgence of the Taliban. The rise of both ISIS and the Taliban are based in large measure on the utterly incompetent and corrupt nature of the Baghdad and Kabul governments. But it is past time that we recognize and accept the fact that part of the blame for the rise of these insurgent groups has been – not the limited number of troops we kept on the ground – but on our sometimes blind reliance on military means to solve complex historical, cultural, and economic problems. The case of the Taliban’s rebirth is instructive.

We are often told that the Taliban arose from the post 9/11 ashes because President George w. Bush “took his eye off the ball” by diverting resources from Afghanistan to invade Iraq in March 2003.  Yet this rendering of events likewise fails to examine the conditions at the time. The problem wasn’t that the President diverted resources to attack Iraq (which was, to be sure, a foolish decision), but that we left combat troops there even after the threat had been eliminated.

In the summer of 2001 the Taliban was annihilated – not ‘defeated’ – but wiped out as an organization.  At that moment there was no reason to leave any U.S. or NATO troops on the ground. We should have redeployed combat forces at that time and transitioned to a diplomatic mission focused on rebuilding the country’s infrastructure and economy, assisting where necessary in the rebuilding of their form of government (but leaving it mainly to the Afghan people to determine).

But we didn’t leave. We chose to remain. Even as late as 2006, when I was first deployed to Afghanistan, the security situation was so benign I was able to travel, without body armor, in a standard pickup truck to attend a graduation ceremony of Afghan police candidates in the northern city of Mazer-e Sharif – being invited to visit the inner courtyard of the famous Blue Mosque by the local Imam.

The infamous Afghan surge of 2009-10 did to the insurgency what kerosene does when thrown on an open fire. Over 100,000 U.S. and NATO combat troops deployed into the country to ostensibly quell the rising insurgency but succeeded only in seeing the violence explode to then-unprecedented levels. Today there are still 13,000 NATO troops in Afghanistan, yet the presence of those troops have done nothing to prevent the continued strengthening of the Taliban. 100,000 troops was not enough to militarily defeat the Taliban and terrorist threats. What possible rationale could be put forth to plausibly suggest one tenth that number could?

The evidence and wreckage of the failure of the military-focused policy in Afghanistan is blatant and overwhelming: the Taliban are stronger now than at any time since 2001, the Afghan security forces suffer casualties at unsustainably high rates, the drug industry – which effectively did not exist prior to our invasion – is huge and out of control, Afghan civilians suffer more killed and wounded than at any time in the war, NATO rebuilding efforts have been abysmal failures, and the government in Kabul is the world’s 172d most corrupt (of 175) in the world.

Yet despite this overwhelming, graphic, and unambiguous evidence of strategic failure, still proponents of military-first policy continue in the ascendance and all other options are derided as unrealistic. Until America’s foreign policy and defense leaders admit the obvious failure of the guiding philosophies they have followed, the U.S. is likely to continue making bad situations worse, deepening the harm to American interests abroad and damage to our allies.

Daniel L. Davis retired from the US Army as a Lt. Col. after 21 years of active service.  He was deployed into combat zones four times in his career, beginning with Operation Desert Storm in 1991, and then to Iraq in 2009 and Afghanistan twice (2005, 2011).  He was awarded the Bronze Star Medal for Valor at the Battle of 73 Easting in 1991, and awarded a Bronze Star Medal in Afghanistan in 2011.