If China and Japan Went to War: What Would America do? 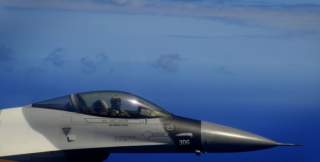 Editor's Note: The following was first published by the Lowy Institute Interpreter.

Picture it: It's March 1, 2015. Tokyo and Beijing are headed towards what was once the unthinkable.

Over the last several months China has instituted daily non-naval maritime patrols around the hotly disputed Senkaku/Diaoyu islands. Beijing is even sending fully-fledged naval assets within the islands' 12 mile exclusion zone while its aircraft carrier, the Liaoning, exercised only 50 miles away from the islands back in February — truly the end of Beijing's small-stick diplomatic strategy.

But on 1 March the plot thickens. Two Chinese SU-27 fighters come within 25 feet of a Japanese P-3 Orion surveillance plane just 10 miles west of the Senkakus (sound familiar?). The Japanese pilot gets nervous. A slight tweak at the controls and the Japanese plane collides with one of the Chinese fighters. Both aircraft crash into the ocean, with no survivors.

Naturally each side blames the other. Beijing accuses the Japanese pilots of violating Chinese sovereign airspace and violating its Air Defense Identification Zone, or ADIZ. Japan claims the Chinese pilots acted recklessly, flying so close. The media in both countries fan the flames of nationalism. Just 72 hours later, a group of twenty Chinese nationals land on one of the disputed islands under the cover of darkness. Rumors swirl that Beijing knew of the voyage but did nothing to stop it. A Japanese naval task force carrying a small detachment of soldiers is dispatched. Their goal: remove the only residents of the disputed five-island chain.

Beijing threatens force if its citizens are harmed. As Japanese naval forces come within 20 miles of the islands a Chinese J-10 fighter jet buzzes the task force. On its second pass it comes dangerously close to a Japanese destroyer. In a perceived act of self-defense, the destroyer shoots down the aircraft.

Hours later, as Japanese forces begin operations to remove the Chinese nationals from the Senkakus, Beijing fires a warning shot, a DF-21D or “carrier-killer” missile which hits the ocean just 10 miles away from the Japanese task force. Undeterred, Japanese forces press ahead. Domestic pressure on Chinese leaders becomes intense. They feel they have no choice but to escalate, launching a massive saturation strike with ballistic and cruise missiles against the Japanese task force. Three vessels are hit with heavy loss of life. Global media coverage of the burning hulks and bodies in the water reaches a fever pitch. Prime Minister Abe urgently phones President Obama formally requesting America's help under the terms of the US-Japan alliance — a 3am call no president would ever wish to receive. War in Asia seems imminent.

While the above is thankfully fictional, it's what could happen next in this scenario that should have Asia hands pacing the floor at night.

As the Obama Administration has shaped its 'pivot' or rebalance to Asia, one under-appreciated aspect of this strategy is the reinforced security commitments Washington has made to allies, which come at the possible cost of American blood and treasure. During his recent trip to Japan, President Obama for the first time declared that the Senkaku islands, because they are administered by Tokyo, fall under the protective veil of the US-Japan security alliance (various top American officials had previously also made such statements).

As the example above shows, a Sino-Japanese conflict could start from the most unlikely scenario, where one incident builds on another and both sides share the blame. What would President Obama do? Considering his recent speech at West Point, which favors tired idealism over substance and displayed what David Rothkopf called a rehash of Obama's "Walmart foreign policy," can anyone really know for sure?

This drives to the very heart of America's rebalance to Asia and exposes a fatal flaw in its foundations. Would Obama make the case to the American people that its men and women should give their lives to what many pundits would undoubtedly spin as a ploy to protect a bunch of rocks with a funny sounding name, rocks which most Americans could not even find on a map? Considering the President's limited political capital, with only two-and-a-half years left in office, would he make the case under less than clear-cut circumstances for a conflict which many would say is not in US national interests? To put the question differently: short of an unambiguous Chinese invasion of the Senkakus, would he back Japan unconditionally? Or more broadly: under what circumstances would America come to Asia's rescue?

Ominous questions, for sure. Maybe this is the reason Prime Minister Abe reacted the way he did at the recent Shangri-La Dialogue. And maybe this is why Australians are considering a much bigger role for themselves — or “A Larger Australia” — in the region as well as globally. While American intentions might be there, the will to act may not, even for a treaty ally.

But let's back up for a moment. Say Obama did make the case for intervention in the scenario I outlined above. How would the average American respond? If most Americans would not support US military action in Syria, would they support a war over the Senkakus, or the Second Thomas Shoal, or any other disputed island or reef in the Asia Pacific? Clearly, America's national interests are at stake if the status quo is washed away in Asia. But in an age of quick sound bites and rabid social media, can such interests be articulated so that Americans would be prepared to die for the Senkakus, a reef, or even a hard-to-articulate international order?

As much as I believe in my heart of hearts that America must rebalance its foreign policy towards Asia and that Washington should certainly come to the aid of its allies, absent the loss of American lives or an outright invasion of a treaty ally it is hard to see a scenario in the near future where an American president is able to present successfully such a vision.

To be clear, none of this is to cast a vote in favor of America abandoning its Asian allies in any way, shape or form. I strongly believe the present international order as constructed in the Asia Pacific and wider Indo-Pacific is worth fighting for. American prosperity and security is based on an international order created by Washington and its allies after World War II. If and when it were to be overthrown, Americans would find themselves in a less secure, less stable international environment.

However, Washington's Asia Pacific allies must understand the limitations of America's rebalance to the region. Without such an understanding, Asia might be caught off guard in a crisis.