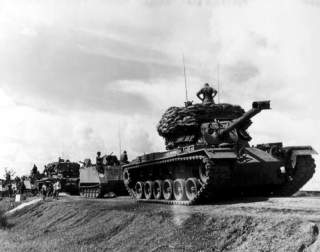 What if? Those two words are easy to ask, whether about our own lives or world history. But the answers can be haunting—a different choice might have created a better opportunity or prevented a tragedy. Just consider the U.S. response to Ho Chi Minh’s declaration of Vietnam’s independence onSeptember 2, 1945.

Vietnam had been a French colony before World War II started. After France fell to Germany in 1940, Japan seized control of Vietnam, but allowed French officials and troops to administer the country. Seeing an opportunity to liberate Vietnam, Ho made his way to Vietnam from China in early 1941. It was the first time in three decades that he had set foot in his homeland. He had spent thirty years in exile, living in the United States, Britain, France, and Russia among other places.

Ho and his initial few followers operated in primitive conditions in mountainous jungles along Vietnam’s border with China. Local Vietnamese slowly joined his cause. With time, Ho’s forces, known as the Viet Minh, effectively wrested control of several of Vietnam’s northern (and remote) provinces. In March 1945, with the war in Pacific having clearly turned against Japan, Tokyo seized direct control of Vietnam and evicted French troops. The Viet Minh used the resulting confusion to seize even more territory.

The Viet Minh’s success attracted the attention of the U.S. Office of Strategic Services (OSS), the forerunner to the CIA. In March 1945, an OSS officer met with Ho in Kunming, China. The two men quickly struck a deal. The OSS would equip the Viet Minh with radios and some light arms. In return, the Viet Minh would give the OSS intelligence, harass Japanese forces, and try to rescue American pilots shot down over Viet Minh-controlled territory.

A small number of OSS operatives parachuted into northern Vietnam in mid-July 1945 to help train the Viet Minh. This so-called Deer Team found Ho deathly ill, “shaking like a leaf and obviously running a high fever.” They treated him for malaria and dysentery, and he recovered quickly. Looking forward to what would happen after Japan’s defeat, he asked his American guests, “your statesmen make eloquent speeches about . . . self-determination. We are self-determined. Why not help us? Am I any different from . . . your George Washington?”

Ho’s question quickly became relevant when Japan surrendered in mid-August. With the Japanese defeated and French forces long gone, the Viet Minh moved into Hanoi unopposed. It marked the first time Ho had set foot in his country’s biggest city. The streets were draped with Viet Minh flags. Talk of independence was in the air. Ho did not disappoint.

On September 2, 1945, in front of a crowd of hundreds of thousands, Ho declared Vietnam an independent nation. He began his speech with words familiar to any American schoolchild:

“All men are created equal. They are endowed by their Creator with certain inalienable rights, among them are Life, Liberty, and the pursuit of Happiness.”

This immortal statement was made in the Declaration of Independence of the United States of America in 1776. In a broader sense, this means: All the peoples on the earth are equal from birth, all the peoples have a right to live, to be happy and free.

Ho started by quoting Thomas Jefferson’s famous words for a reason: He desperately wanted U.S. support. Having it would prevent France from trying to reassert control over Vietnam and help keep Vietnam’s powerful neighbor and historical adversary China at bay. Seeking U.S. support seemed a reasonable goal. President Franklin Roosevelt’sopposition to European colonialism was well known. He had insisted that the 1941 Atlantic Charter, issued jointly by the United States and Great Britain, contain a provision stating that both countries respected “the right of all peoples to choose the form of government under which they will live.” FDR wanted the United States firmly on the side of anti-colonialism, and liberation movements across the globe took him at his word.

But FDR wasn’t alive to read Ho’s speech. Harry Truman now sat in the Oval Office. Anti-colonization wasn’t his cause. He viewed Southeast Asia through the lens of Europe. His priority was seeing that a successful French government grew out of the ashes of World War II. And the French were clamoring to reclaim their colonies. Sacrificing the interests of an obscure Asian country that hadn’t even merited a U.S. ambassador before World War II was a small price to pay to help secure stability in Europe. When a letter from Ho seeking U.S. support arrived in Washington in September 1945, passed along by a supportive OSS agent, it went unanswered. So did a telegram that arrived in February 1946 with a similar message. By then, French forces had begun returning to Vietnam. War would quickly follow.

Ho’s appeals for U.S. support would not be Washington’s last opportunity to chart a course different from the one it ultimately chose in Vietnam. As the historian Frederik Logevallhas shown in his terrific books Embers of War and Choosing War, Truman and his successors passed by many other “off ramps” on the road to the American war in Vietnam. But in retrospect, Ho’s bid for U.S. support in 1945 might have been the best chance to avoid the fighting that would leave more than 58,000 Americans dead, see more than 150,000 wounded, and deeply divide the country.

Would Vietnam have become a loyal American ally and budding democracy had Washington thrown its support behind Ho in late summer 1945? Perhaps. But perhaps not. Yes, Ho was a committed Vietnamese nationalist. He was also a committed communist. He wasn’t shy about ordering the deaths of his political opponents. When the Viet Minh finally defeated the French and won control of North Vietnam in 1954, he instituted policies that led to the executions of thousands of Vietnamese. Even if Ho had shunned violence, a multitude of events or disagreements could have derailed any lasting U.S.-Vietnamese partnership.

So we will never know the answer to the “What if” question on Vietnam. History is lived once. It can’t be replayed. But we can wonder.