If North Korea Isn't Communist, Then What Is It? 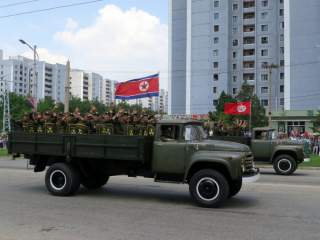 Last month I argued that North Korea is not really a communist state, at least not as we normally understand Marxist-Leninist states in the 20th century. For example, North Korea is governed by a monarchic family clan; its 'socialism' has been broadly replaced by corruption (at the top) and informal marketization (at the bottom); it flirts with race-fascism. Yet it does still retain obvious elements of old Stalinist states – for example, in its iconography, obsession with ideology, and anti-Western foreign policy relationships.

In my experience in this area, both scholarly and journalistic, this creates a lot of confusion and intellectual competition, with consequent political repercussions over how exactly to respond to North Korean provocations. There is a wide division out there about just how to interpret North Korea, what it 'really' is, what it 'really' wants, and so on. Similarly, a common retort to de-legitimize one's intellectual opponents in the study of North Korea is to claim another does not really 'understand' the 'true' North Korea.

The easy answer is to throw up one's hands and call North Korea sui generis. That may be right in the way North Korea synthesizes seemingly disparate elements into what should be an ideological rube-goldberg jalopy. But North Korea manages to hang on regardless of how many times we analysts say it is an incoherent mess. So it seems worthwhile to sketch out some of the various interpretations floating around out there. Based on my experience at conferences, in scholarship and journalism, from my trip to North Korea itself, and so on, I would say there are five primary interpretive angles:

What is their ideology? Traditional conservative

What is their big fear? A Northern invasion of South Korea

I argued against this interpretation last month, and I would reckon most North Korea analysts would say this is no longer the best way to read Pyongyang. But I find it is still quite popular. Its appeal is obvious. It is easy to understand, parallels nicely with South Korea as the liberal democratic alternate, and fits into an obvious frame – the Cold War.

And because North Korea started out this way, all sorts of vestiges remain: the socialist moniker (the Democratic People's Republic of Korea), the iconography (lots of red, the flag, the national seal, the party symbol), the autarkic ideology. And Kim Il Sung, the regime founder, almost certainly believed in socialism or communism (although whether his son and grandson do is matter of intense debate).

2. North Korea as a dangerous rogue state gumming up the works of globalization and U.S. hegemony:

Who believes this? U.S. hawks and think-tankers

What is their ideology? Neoconservative

What is their big fear? Nuclear proliferation

The idea here is that North Korea has actually successfully adapted to the end of the Cold War and remade itself as a gremlin in global governance. It refuses to follow even the most basic rules; its decision-making is a fog to outsiders; it does not belong to any international organizations. It is the most unpredictable state in the system. Back when he was Undersecretary of Defense, Paul Wolfowitz captured this anxiety well: “I'm more profoundly skeptical of North Korea than of any other country—both how they think, which I don't understand, and the series of bizarre things they have done.”

What is their ideology? None

What is their big fear? Nationalist competition with and subversion of South Korea

Brian Myers has led this school, which argues that North Korea is a misunderstood racist state based on Japanese and German fascist forms from the early twentieth century. It rallies its citizens through aggressive race-based nationalism (the defense of minjok), defends the racial 'cleanliness' of Korea in a big intrusive world, insists that ethnic Koreans of other nationalities are still Koreans, and routinely uses racist language in its diplomacy. On top of this, it is one of the most highly militarized states in the world. Racism plus hypermilitarism looks a lot more like fascism than communism.

Notably, when I was in North Korea, my minders used a lot of this sort of language. As one of them put it, 'no mixing' (ie. inter-racial mixing).

What is their ideology? Leftist

What is their big fear? American misunderstanding and overreaction

If the above interpretations are all congenial to conservatives and hawks, here is perhaps the one I encounter most from the left. The idea here is that North Korea is more Korean than socialist or fascist, and that if we look at Korean history, we can see where it came from. For example, the North Korean monarchy is not a transplant of Stalinism but a reversion to Korea's earlier Confucian political form, a point evidenced by the inclusion of a Confucian writing brush in the party symbol, and in the DPRK's insistence that it is a modern version of Koguryeo, a much earlier Korean kingdom.

Or, it was U.S. behavior during the Korean War – specifically the extraordinary bombing of the North — which radicalized Kim Il Sung and the Korean Workers Party. If the U.S. had not been so brutal, the logic goes, the North Korea would have been more like North Vietnam or East Germany, instead of the Orwellian tyranny we know today. The policy extension of this view is that North Korea must be brought in from the cold by outreach such as the Sunshine policy.

5. North Korea as a mafia racket masquerading as a country:

Who believes this? No clear school (me, Alastair Gale, Josh Stanton)

What is their ideology? None

What is their big fear? An Inter-Korean federation that effectively subsidizes North Korea permanently

This is perhaps close to the neoconservative interpretation. The more I study North Korea, the more the gangsterism strikes me. North Korea is indeed a trouble-making rogue. But it is far more predictable than rogue/conservative interpretations permit. North Korea is not in fact suicidal, nor is it likely trying to bring down South Korea, invade it, or otherwise achieve Northern-led unification. This is all out of its reach, and there's no way China, Japan or the U.S. would stand by if these eventualities actually began to play out. What Pyongyang wants more than anything else is just to survive, so war is highly unlikely; and its elites want the lifestyle to which their bloody climb to the top has entitled them.

We know that North Korea routinely engages in illicit behavior: smuggling, drug production and running, insurance fraud, proliferation, counterfeiting of dollars and RMB. We know that throughout the 'sunshine' period it took every advantage to demand South Korea pay for joint projects, and even pay Pyongyang off directly. It rips off its own labor force, whether working abroad in Siberia or in the Persian Gulf, or at home in the Kaesong industrial zone. Inside North Korea, corruption is endemic, and its elites gorge themselves at the population's expense. Kim Jong Il's appetites for liquor and women were neronian, while Kim Jong Un has continued his father's partying rule by building a ski resort (yes, really).

In short, North Korea is post-ideological and akin to The Godfather: a massive racket to shake down anyone, inside North Korea and out, to fund the self-indulgent lifestyle of a narrow elite. North Korea is what happens when Don Corleone takes over an entire country and can enforce his clan rule with a secret police rather than just capo henchman. Actually, North Korea is barely a country at all; it's an Orwellian gangster fiefdom.