If the J-20 Stealth Fighter Is So Amazing Why Is China Buying Russia's Su-35? 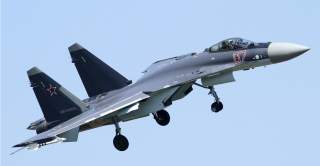 Even as China is publicly showing off its new Chengdu J-20 stealth fighter at the Zhuhai air show for the first time, Beijing is continuing its efforts to acquire advanced Russian fighters.

Indeed, while a pair of J-20s garnered the attention of the world’s media, the Russian government quietly announced that it has started work on building 24 Sukhoi Su-35 Flanker-E fighters for the Chinese People’s Liberation Army Air Force (PLAAF). China signed a contract for the delivery of two-dozen Su-35s in November 2015 worth at least $2 billion.

“Delivery of these aircraft to China will be carried out under the terms defined by the relevant contract,” Vladimir Drozhzhov, deputy director of Russia’s Federal Service for Military-Technical Cooperation, told the Moscow-based TASS news agency. “We are now carrying out the execution of the first phase of our contractual obligations.”

As such, Russia is expected to deliver four Su-35s to the PLAAF before the end of the year. The remaining Su-35s are expected to be delivered within the next three years. But given the Kremlin’s previous experiences with selling China advanced technology, Moscow has insisted on agreements to secure Russian intellectual property onboard the Su-35. In previous years, the Chinese reverse engineered older versions of the Flanker into the Shenyang J-11, J-15 and J-16 series of aircraft.

“We established a Russian-Chinese working group for the purposes of practical implementation of this agreement, which held a regular meeting in September this year,” Drozhzhov said.

Despite whatever agreement Beijing might have signed with Moscow, the Chinese are almost certainly interested in the Su-35 to harvest its technology. While the current configuration of the J-20 externally resembles a genuine fifth-generation fighter in several respects, China remains woefully lacking in engine and mission systems avionics technology. The Su-35’s Saturn AL-41F1S afterburning turbofans, Tikhomirov NIIP Irbis-E phased array radar and electronic warfare suite are likely of high interest to Beijing.

Indeed, China has not perfected its indigenous WS-10 for its Flanker clones, let alone come close to finishing development of the next-generation WS-15 it would need for the J-20. The WS-15 is currently thought to be in a ground-testing phase with flight trials set to begin on an Ilyushin Il-76 some time in the future.

In fact, China has not demonstrated it can build any reliable jet engine—and that’s including designs that it basically stole from Russia. Indeed, the J-20 currently appears to be powered by twin Russian-built Saturn AL-31F engines found on the Sukhoi Su-27 and its many Chinese knockoffs. The addition of the Russian-built AL-41F1S series engines might provide a solution to Beijing’s engine woes.

There are indications that the J-20 carries an active electronically scanned array radar (AESA). Allegedly, the J-20 would be fitted with a Type 1475  (also referred to as the KLJ-5 radar), which is supposedly being tested on a China Test Flight Establishment owned Tupolev Tu-204. However, there is no way to confirm that information because the PLAAF isn’t all that forthcoming about sharing information concerning its developmental projects. However, Russian radar technology is generally believed to be ahead of China’s and it is certainly possible Beijing could glean valuable technical insights from the Irbis-E.

The one advantage the Chinese have over the Russians is in the realm of electro-optical/infrared targeting systems—where Moscow has lagged behind in the wake of the post-Soviet economic meltdown of the 1990s. Indeed, the J-20 does appear to have an electro-optical targeting system (EOTS) mounted under the nose—which could be the Beijing A-Star Science and Technology EOTS-89. But there is no publicly (and reliable) data available about the performance of that sensor. It is very likely it does not match the performance of American or Israeli systems.

Certainly, the J-20 does represent a leap forward for the Chinese defense-aerospace industry. One day, China will be able to develop and build its own jet engines as well as create world-class mission systems avionics—especially given the investment Beijing continues to make into the defense-aerospace sector. However, that day is not today. If the J-20 was really as capable as some would have you believe, Beijing wouldn’t bother with buying a token fleet of Su-35s—there would simply be no point in doing so.

Dave Majumdar is the Defense Editor for The National Interest. You can follow him You on Twitter: @DaveMajumdar.