If Ukraine's Economy Is to Reform, Then Its Inefficient Health System Has to Go 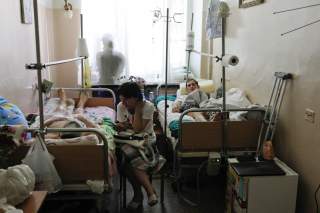 The United States is not the only country caught up in an emotional debate over health care. The Ukrainian Rada (parliament) has been struggling with the issue for months. And like their counterparts in the U.S. Senate, Ukrainian lawmakers scuttled plans to pass health-care reform just before breaking for summer recess on July 19.

In Ukraine, however, the stakes for reform are higher. For starters, more than 90 percent of Ukrainians have no medical insurance. But the problems go far deeper than that.

The country’s current health-care system is a legacy of the Soviet era—and a most sorry one. Government funding and resources for hospitals are allocated according to the number of medical workers, buildings and beds, rather than the number of patients treated. Physicians and administrators, saddled with a mind-set stuck in the Soviet way of doing things, shun more advanced Western practices and equipment.

The carry-over egalitarianism of the Soviet era leaves doctors earning a paltry $200 a month. Naturally, this breeds corruption. For example, bribery is a commonplace precondition for receiving medical treatment. The situation is dire.

So dire, in fact, that International Monetary Fund (IMF) has insisted that Ukraine reform its health system. The IMF’s program to keep the Ukrainian economy afloat is contingent on significant economic reforms, including fixing the corrupt and inefficient health system.

The big stumbling blocks have been the entrenched corruption and Soviet mind-set of Ukraine’s older generation of political leaders.

But leading the charge for reform is a relative newcomer, Dr. Ulana Suprun, Ukraine’s Acting Minister of Health.

Born, raised and educated in the United States, Dr. Suprun had a successful radiology practice in New York City. When the Maidan revolution erupted in early 2014, the Ukrainian-American physician traveled to Ukraine to treat those wounded by the security forces of former President Viktor Yanukovych.

Then, when Russian proxies in Eastern Ukraine, backed up by regular Russian troops and equipment, started an insurrection against the central government, Dr. Suprun moved to the frontlines of the conflict, providing lifesaving care and NATO standard Combat Lifesaver training to soldiers.

In 2015, a thankful Ukrainian president, Petro Poroshenko, conferred upon her Ukrainian citizenship, saying during the ceremony: “Your efforts saved thousands of lives.” In August 2016, she was asked to become the acting Minister of Health.

Under her leadership, the government has rooted out a significant amount of corruption from the health-care sector. For example, by changing the way the Ministry of Health procures pharmaceuticals, the department cut those costs by 40 percent. But more needs to be done.

The reform Suprun was pushing this year aimed to raise the level of Ukrainian health care to international standards. It would, for example, require medical licenses for individual doctors. Currently, only medical practices are licensed and they can hire doctors straight out of medical school, with no clinical training or experience.

The reform bill currently up for a vote in parliament would also change the way hospitals are funded, linking the money more closely to actual delivery of patient services. And it would close down or consolidate hospitals that aren’t treating enough patients to remain cost effective and provide quality services.

As if that weren’t enough, the proposal would have: reformed palliative, emergency and primary care simultaneously; freed doctors to earn more money in an open, transparent manner so they would not have to resort to bribe-taking to generate additional income; and provided universal health care coverage for all Ukrainians.

The ultimate goal of the reform package was to empower patients, giving them new rights and protections—a noble ambition. No wonder the G7 Ambassadors to Ukraine endorsed the proposal, calling it “a sign that Ukraine is ready and committed to moving forward with its vital reforms, in health care and anti-corruption, for the benefit of its citizens.”

The old guard in the Rada was able to block Suprun’s reform bill from coming up to a final vote just before the summer recess. But that’s not necessarily the end of this fight. The Rada will have another chance to vote on it when lawmakers reconvene in September.

The outcome of the health care vote will likely chart the future policy direction of Ukraine: whether it will remain stuck in its failed Soviet past or move toward a brighter future in the Euro-Atlantic community.

Image: Soldiers of the Ukrainian Army who have been injured during fighting against separatists in Eastern Ukraine, lie on hospital beds in a ward at the Central Clinical Hospital of the Ministry of Defense of Ukraine in Kiev June 13, 2014. REUTERS/Valentyn Ogirenko​