Imagine This: Almost Every Russian Warship Armed with Hypersonic Missiles 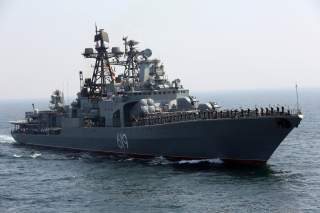 If everything goes according to plan, sometime in the mid-2020s the Russian Navy will adopt an anti-ship cruise missile called the Zircon. It’s a highly maneuverable and hypersonic cruise missile — meaning a weapon capable of traveling at speeds in excess of Mach 5 due to its advanced scramjet engine.

Scramjets kick in once the missile has already accelerated to high speeds with the use of a conventional solid-fuel engine. Once zooming through the air, the scramjet sucks in and compresses air already traveling at supersonic speeds to propel the vehicle further at velocities lesser engines can’t handle.

Such missiles travel so fast, designing the vehicles and onboard guidance systems to withstand the heat and friction caused by meeting air resistance at Mach 5 and beyond is one of the biggest challenges in hypersonic development.

Provided Russia can figure out those engineering issues, and they are significant, then it will field one of the deadliest anti-ship missiles in the world. There have been several tests of the Zircon already beginning in April 2017 — although a purported maximum speed of Mach 8 is likely exaggerated — and Russia produces first-rate missiles on par with, and arguably better than, anyone else in the world.

So, a working Zircon in less than a decade is a very real possibility, with a possible maximum range of 500-640 miles, more than three times that of the longest-range version of the American Harpoon.

No wonder the U.S. military is racing to develop new long-range anti-ship missiles and hypersonic weapons of its own.

The Zircon could pack a 650-pound warhead, and a small radar signature and extreme speed will make the Zircon difficult for air-defense sensors to detect and for shipborne anti-missile countermeasures to intercept. Russian press reports have a habit of sensationally promoting the Zircon as nigh-invulnerable, however, the combination of speed and maneuverability present a serious threat.

“These features enable such missiles to penetrate most missile defenses and to further compress the timelines for a response by a nation under attack,” the California-based think tank RAND Corporation noted in a recent study.

There’s another interesting fact about the Zircon that is equally important to the missile’s raw capabilities — the type of launcher.

Warships have limited space to fit the vertical-launch cells which fit hypersonic missiles and descend deep into the ship — they generally must be designed from the beginning for the task. For this, the Russians are developing the Zircon to fit inside the 3S-14 VLS system which also launches the supersonic anti-ship Onyx cruise missile along with anti-ship and land-attack versions of the subsonic Kalibr.

The bad news for the U.S. Navy is that the Russian Navy sticks the 3S-14 VLS inside almost everything, from tiny corvettes to lumbering heavy cruisers.

“This means that most current Russian submarines, cruisers, destroyers, frigates, and even corvettes will be capable of firing any of these three missiles,” O.E. Watch, the monthly newsletter of the U.S. Army’s Foreign Military Studies Office, noted in October 2017. “This practice is an example of Russia’s current line of effort for modularity and interoperability.”

“Undoubtedly, this shift is due to economic necessities that require a much smaller Navy than Soviet times when specialization was practical,” the newsletter continued. “Russia has not only switched to multirole vessels to get the most out of every defense dollar, but has also enforced interoperability with certain Ground Forces and Aerospace Troops elements.”

Thus, even if the Russian Navy is practically a coastal defense force at this point, it’s one with impressive reach.