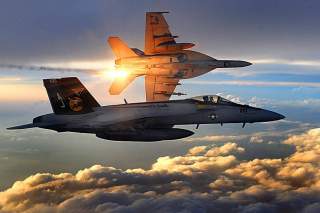 This is a bit of a departure from my usual writing, but I would like to recommend and discuss a book written by a friend and former colleague of mine, Peter Singer, entitled: Ghost Fleet: A Novel of the Next World War (co-authored with August Cole). I do so with admiration for the book—and also a firm conviction that many will find it important on the substance but also highly entertaining and a great summer read.

The book is to some extent in the Tom Clancy genre, but it looks a little further into the future, positing a war pitting the United States against a "Directorate" created by China and Russia in the 2020s. Beyond that basic fact, I will hereby commit to avoid discussing the plot any further, because it is fun and engaging and suspenseful.

It is also scary. It's scary because the whole thing is not implausible. One can debate just how likely, but not implausible. In fact, one of the best things about this book is that, while quite clever and extremely well informed, it does not try to be too clever. The plot line is not like something from left field, and the use of the future as well as futuristic technologies is not like fantastical science fiction.

This last point is quite important. Singer, an award-winning bestselling author of several books, including most recently Wired for War (about drones and robotics) and Cybersecurity and Cyberwarfare, has become one of the most technologically sophisticated American defense writers of his day. And in recent months, he has taken to writing a blog about trends in the technological capacities of the PRC as well. All of this sets him up very well to write a book that depends on key trends in technology that are already underway or incipient. By looking about a decade into the future, Singer is just giving himself time to imagine weapons systems and technologies that are now in R&D or laboratory stages to be fully developed, procured, and deployed.

There are perhaps one or two technological leaps Singer postulates that seem less credible. But they are few and far enough between to count as poetic license, not mistakes, in his analysis. And moreover, who knows just what the future may hold? Surprises do occur.

Most of what is in the book, though, is well within reach today. Miniaturized robotics, weaponized drones, high-performance unmanned aerial vehicles, cyberattacks on key military systems, exoskeletons, personalized computer gadgetry that can be worn as eyeglasses or implanted in one's skin, stimulants to enhance personal performance in crunch moments, neurosensors that effectively help read a person's mind—these are among the areas of technology where Singer knows the literature and lets his own creative thinking take things out another 10 years to imagine how they could all work together in a future conflict. One only hopes U.S. military planners are letting their hair down half as much when being creative about plausible scenarios!

There are other nice twists, too. Americans playing the role of insurgents within a certain phase of the future conflict is perhaps my favorite. One little comment on a specific character, just so you know that the book is engaging as a work of fiction and is more than just dry futuristic defense analysis—watch out for Carrie Shin! The black widow is quite something, and Singer's depictions of her role in the future war left me turning pages quickly for mention of her next key act!

And perhaps most importantly of all—without saying anything more about the war scenario, let me comment that not only was it credible enough to make the book a good read, it was and is credible enough that we should not assume economic interdependence with China (or mutual nuclear vulnerability, either) will guarantee that we avoid war. Nor is the only plausible catalyst to conflict one of the standard issues in the relationship, like Taiwan or Tibet or the Senkakus. Singer is most convincing, and most useful, in helping dramatize the dangers of such a conflict. He is careful to depict the book as a work of fiction, not prediction. But to be sure that remains the case, policymakers will have to take seriously the kind of scenario he develops in this fine book, and take steps to make such a conflict less likely than it may be in coming years.

Michael O'Hanlon is a senior fellow at the Brookings Institution and coauthor with Jim Steinberg of Strategic Reassurance and Resolve: US-China Relations in the 21st Century.