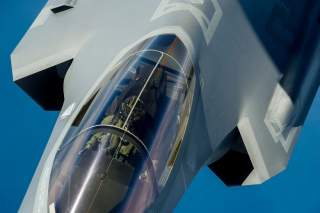 If a major war broke out on Earth below, what would happen aboard the International Space Station?

This and a dozen other wild “what ifs” are answered in the opening pages of P.W. Singer and August Cole’s Ghost Fleet. The novel follows a spiraling cast of characters as they are engulfed by a near-future conflict in the Asia-Pacific—the one that real-life U.S. defense planners spend so much time thinking about.

A hyper-aggressive, technocratic China (“The Directorate”) and a revanchist Russia join forces to attack U.S. assets in the Pacific, decimating the U.S. economy and marking an abrupt end to America’s “Pacific Century.” As the United States struggles to regroup, it must use every tool at its disposal. This includes the U.S. Navy’s “Ghost Fleet,” an armada of outmoded warships that will quickly become the core of the U.S. counteroffensive. At its head is the stealthy USS Zumwalt—and a powerful, untested new weapons system.

Written in the style of Tom Clancy’s Red Storm Rising and Max Brooks’ World War Z, Ghost Fleet is a whirlwind tour of more than a dozen intersecting storylines, set on all sides of the conflict. Alongside sweeping battles by land, sea, and air, a new kind of war unfolds in cyberspace as the best and brightest of Silicon Valley rally to the nation’s defense. Chinese generals and politicians vie for advantage in dark-lit boardrooms; U.S. Marines fight a bitter insurgency in the Hawaii Special Administrative Zone; a wily Russian colonel hunts an insatiable serial killer.

There’s even an American billionaire, cut from the same cloth as Sir Richard Branson, who assembles and proudly captains the first-ever crew of space pirates.

What sets Ghost Fleet apart—and what will be of particular interest to the community reading this review—is the research that has gone into it. Every vehicle, weapon, and gadget is grounded in current or near-future technology. This covers predictable military hardware: the colossal Gerald R. Ford-class aircraft carrier, the powerful F-35 Lighting II, and nearly a dozen variations of flying, swimming, slinking, and scuttling drones. It also includes special multitools, anti-ship missiles, electrical systems, and even small-unit tactics. Yes, even the zero-g training of those aforementioned space pirates can be traced to a real-life counterpart.

Beyond fast and fun reading, Ghost Fleet’s biggest draw is its unified, multi-domain vision of future warfare. In this fight, information is the most important weapon of all. Military might is a direct function of pinpoint GPS targeting and secure communications. If a nation’s satellites are blinded, its systems compromised by cyber-attacks, it doesn’t matter how advanced its military hardware is. Aircraft become a liability. Carriers become coffins.

In Ghost Fleet, some assets are better than others. Swarms of cheap, expendable drones often turn the tide of battle. By comparison, the more “exquisite” platforms find themselves in deep trouble. In a scenario that reflects the real-life headaches of many acquisitions professionals, Singer and Cole explore what happens when the F-35’s complex supply chain intersects with the motivations of a Chinese government-owned microchip producer. The result is exactly what you’d expect: a lot of unlucky pilots and a trillion-dollar paperweight.

With so much focus on the fighting, Ghost Fleet has little room left to explore its politics. There is vague talk of a disaster in the Middle East; the quiet dissolution of NATO; a U.S. president who sternly rules out nuclear escalation in a limited war. Readers are spared the months of frustrated cabinet meetings, angry congressional hearings, and endless hang-wringing within the defense bureaucracy. For a fast-paced, tech-centric, summer popcorn-thriller, this is for the best.

Ultimately, Ghost Fleet is Tom Clancy for a new generation, written by authors who know what they’re talking about. It doesn’t glorify the war it describes, but it does wonders in its illustration. The result is a vibrant vision of conflict in the information age—and hopefully the closest we’ll get to the real thing.

Emerson Brooking is a research associate for defense policy at the Council on Foreign Relations. In 2013, he was an intern at the Brookings Institution’s Center for 21st Century Security and Intelligence, at which time P.W. Singer served as the center’s director.