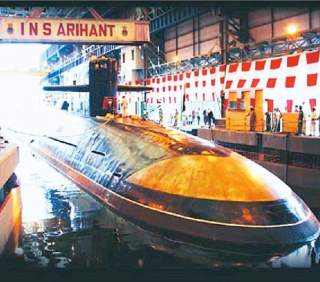 On Monday, Indian Defense Minister Manohar Parrikar announced that INS Arihant--which roughly translates to “annihilator of enemies”-- pulled out of Visakhapatnam Harbor this morning to begin its long awaited first sea trials. The Hindu described in the scene in unusually poetic language, writing, “INS Arihant, with a helicopter flying over it, emerged from the breakwaters into the Bay of Bengal even as low hanging mist made it difficult to view the submarine. The submarine glided in [the] Bay partially submerged as part of its sea trials. INS Arihant majestically sailed north in the Bay along the coast, partially submerged. After about an hour later it disappeared into the mist.”

In some ways, the event was decades in the making. India first began discussing the potential of nuclear powered submarines back in the 1960s, and officially launched its Advanced Technology Vessel (ATV) submarine program in 1984. It wasn’t until 2009 when the ATV program finally bore fruit with the launch of INS Arihant.

Since then, Indian officials have repeatedly promised the vessel would soon begin sea trials, only to be followed by further unexplained delays. In January 2012, for instance, the Times of India cited numerous “top defense ministry sources” in reporting that the sea trials would begin the following month. The same report suggested the Indian Navy could actually commission the vessel as soon as six months after sea trials began.

In July of the following year, Indian media outlets again began reporting that Airhant would begin sea trials shortly. “The nuclear reactor that will power the submarine can be formally declared ‘critical’ anytime now, while the nuclear-tipped missiles to be launched from underwater are in place,” an “informed insider” told reporters. These reports suggested that the Navy was only waiting for the annual monsoon rains to end.

Then, in February of this year, Indian officials again suggested that sea trials would begin within one to two months. At the time, Avinash Chander, chief of India's Defense Research Development Organization (DRDO), which spearheaded the submarine program, confidently predicted that Arihant would be commissioned by the navy sometime next year.

In any case, once it is commissioned, the vessel should provide a significant boost to India’s strategic deterrent. INS Arihant is 6,000-ton ballistic missile submarine powered by an 83 megawatts pressurized light-water reactor. It is modeled off of the Russian Akula-1 class submarines, and its nuclear reactor was built with “significant” Russian assistance, according to local media reports. Its hundred person crew was also trained by Russian specialists.

Although India has operated Russian-made nuclear submarines, these are reportedly not equipped with nuclear-armed missiles due to international treaties prohibiting this. By contrast, Arihant is the lead ship in a class of SSBNs of the same name that will give Delhi a nuclear triad. Delhi is hoping to build 3-4 Arihant-class submarines.

Each submarine will be equipped to carry up to 12 K-15 submarine-launched ballistic missiles (SLBM), which have a range of 700-750 km. Ultimately, India hopes to equip them with 4 K-4 SLBM, which have ranges of up to 3,500 km. It just began testing K-4 SLBMs this year, however, so it’s unclear when those would become available.

The Times of India reported on Monday that the current sea trials will take at least 18 months, although some Indian officials have suggested much shorter times. We’d hedge our bets on both.

Zachary Keck is managing editor of The National Interest. You can find him on Twitter @ZacharyKeck.