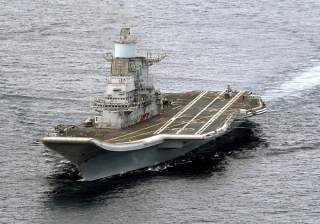 India’s Navy has outlined the some of the specifications for a second indigenous aircraft carrier (IAC-2) in a letter of request to global shipbuilders.

The LoR specifies that India would like to build a 300-meter long aircraft carrier that displaces 65,000 tons. The Navy also said that the ship should be able to travel at 30 knots.

In addition, the LoR says that the aircraft carrier will carry 30-35 fixed wing combat aircraft and about 20 rotary wing aircraft.

In contrast to India’s existing aircraft carriers, which utilize ski-jump launch systems, the LoR for IAC-2 says the ship will have a catapult launched but arrested landing (CATOBAR) system.

It did hold out the possibility that the new aircraft carrier would ultimately utilize an electromagnetic aircraft launch system (EMALS). Currently, only the United States’ latest aircraft carrier, the USS Gerald Ford, uses EMALS to launch fixed-wing aircraft.

The four companies that received the letter are: the U.S.-based Lockheed Martin; the U.K.-based BAE Systems; French shipbuilder, DCNS; and Russia’s Rosoboronexport. A representative from BAE systems has confirmed it has received the LoR from India’s Navy.

While much too early to say, it is likely that Lockheed Martin and Rosoboronexport are seen as the frontrunners to win the contract. India has a long and extensive history of defense cooperation with Russia. Indeed, India’s Navy currently operates a modified Kiev-class carrier, INS Vikramaditya, which India purchased from Russia.

Meanwhile, the United States has been deepening its military cooperation with India in recent years. In fact, earlier this year it was announced that the United States is considering helping India expand its aircraft carrier fleet.

A joint statement released by the two countries back in January said that they were forming a working group to explore Washington providing Delhi with aircraft carrier technology. Both countries view China’s rising military power as a long-term threat, and have sought to expand cooperation in order to balance against that threat.

India is currently testing its much delayed first homegrown aircraft carrier, INS Vikrant. That carrier, which will displace 40,000 tons, is expected to become operational in 2018, roughly five years late. It has also been hit by major cost overruns, and the total cost is now expected to be around $4 billion.

The LoR follows India allocating funding to begin conceptual work on IAC-2. Back in May, the Defense Acquisition Council (DAC), which is chaired by India’s defense minister, Manohar Parrikar, approved a slew of deals, including allocating 30 crore (roughly $5 million) to build India’s second indigenous aircraft carrier.

Notably, last week’s LoR did not specify what kind of propulsion system would be used to power the new aircraft carrier, which is expected to be called, INS Viraat. India currently operates a British-made carrier under the same name. That carrier is expected to be retired by the end of the decade.

Whenever IAC-2 becomes operational, it is believed that it will take the place of INS Vikramaditya, the aforementioned Russian-built vessel.