India Could Become a Military Powerhouse Thanks to Russia and Israel 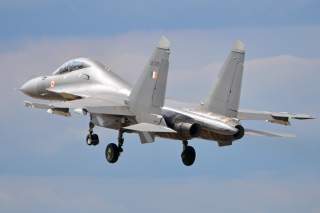 India has begun the new year by announcing a pair of major military buys from Israel and Russia.

India’s Defense Minister Raksha Mantri announced the deals in a press release on January 2. In the statement, the defense minister said that India was purchasing 240 precision-guided bombs from Rosoboronexport, a Russian state firm, for a reported $197 million. The bombs will be used by the Indian Air Force.

Citing IAF sources, the Economic Times reported that “the precision guided weapon is called KAB-1500, which is a laser guided bomb and for use on IAF’s Sukhoi Su-30MKI fighter jets. It is designed to destroy ground targets such as railway lines, ammunition depots, bridges, military facilities and ships. The bomb’s warhead weighs 1,100 kilograms. The bomb has folding fins that allow it to maneuver while being guided to the target.”

The KAB-1500, which Moscow says is comparable to America’s Paveway II and Paveway III series, has been used by the Russian Air Force during its intervention in Syria. Some foreign analysts have estimated that certain versions of the KAB-1500 have a Circular Error Probable (CEP) of four to seven meters, meaning that 50 percent of the bombs would fall within that distance from their target. It is unclear which exact variant Moscow is selling to Delhi, although some sources say it is the one with that CEP.

The Sukhoi Su-30s that will use the bomb are the main workhorse of the Indian Air Force. Delhi builds many of the Russia-designed jets locally, and has procured roughly two hundred of them. Many of the initial planes it purchased have received continuous upgrades to take advantage of improvements Russia has made. Besides upgrading the planes themselves, India has focused on improving the firepower they carry. Along with the KAB-1500 bombs, India has also been modifying some of its Su-30s to carry the Brahmos supersonic cruise missile. As I noted last month, the air-launched Brahmos cruise missiles could be delivered by Russia as early as this month, although they will still need to undergo extensive testing.

In the same press release announcing the sale of the KAB-1500, the Indian Defense Minister also revealed that Delhi is purchasing 131 additional Barak-1 shipborne air-defense missiles from Israel’s Rafael Advanced Defence Systems Ltd. The Indian Navy already uses Barak-1 missiles to protect its ships, but its supply had been running dangerously low. Last May, India’s navy put out a global tender for international firms to bid on a contract for ten short-range surface-to-air missile systems, and six hundred missiles to replace its existing arsenal of Barak-1 missiles. That contract was set to be worth $1.5 billion. Before the contract bid period had even concluded, however, India announced plans to purchase more Barak-1 missiles citing the need to quickly replenish its depleted stocks. It is possible that these 131 new missiles will only serve as a stopgap.

India finalized the agreement with Israel for sea-based missile defenses at the same time as Pakistan’s unveiling of a new antiship missile. On January 3, Pakistan’s Navy said that it had successfully test fired a new indigenously developed “Harba” naval cruise missile. “The missile accurately hit its target signifying the impressive capabilities of Harbah Naval Weapon System,” the navy said in a statement, adding: “The successful live weapon firing has once again demonstrated the credible firepower of Pakistan Navy and the impeccable level of indigenisation in high tech weaponry achieved by Pakistan’s defence industry.”

The reciprocal trips are indicative of the growing ties between Israel and India. During the Cold War, Delhi tried to keep the Jewish state at arm’s length to avoid inflaming Muslim countries, given its ongoing rivalry with Pakistan. The two countries established diplomatic ties for the first time in the 1990s, and cooperation has steadily grown since. The relationship has taken off in earnest since Modi became prime minister in 2014. Although the two countries cooperate across a broad ranges of areas, defense cooperation is especially important to the relationship. According to various media reports, India now purchases $1 billion of arms from Israel every year, making Israel India’s third-largest defense supplier. According to some sources, India is now the largest export market for Israeli arms.

Israel has made a concerted effort to boost Modi’s signature “Made in India” initiative by forming joint ventures with Indian defense firms, including manufacturing drones and missile-defense systems. Included in the latter category is the joint development of the Barak-8, a seaborne long-range air-defense missile. The first of the Barak-8 missiles was delivered to India in the summer of last year. The news has not all been good, however, as India announced this week that it was cancelling a $500 million contract with Israel for 1,600 Spike antitank guided missiles.