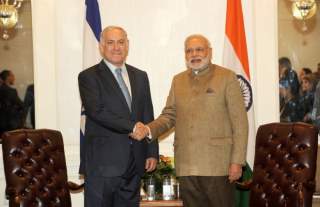 The Indo-Israeli defense relationship is once again in focus following Benjamin Netanyahu's "sky is the limit" comment after meeting Narendra Modi in New York back in September—and especially after the signing of the long-delayed $144 million deal on Barak I missiles in October. Another milestone was crossed in November when New Delhi and Tel Aviv successfully tested the Barak 8 anti-missile system—a joint project developing an aerial defense system for naval vessels. Moreover, since Modi took power this summer, New Delhi has purchased a whopping $662 million worth of Israeli arms.

So is the Indo-Israeli strategic relationship likely to be fundamentally different now that Modi is in power?

Although Indo-Israeli ties are undoubtedly on the upswing, history suggests that Modi is not likely to have a fundamental impact on the substance of the bilateral relationship.

During the early part of the Cold War, Indian Prime Minister Jawaharlal Nehru briefly considered inviting Israel to the 1955 Bandung Conference, but eventually decided against doing so in order to appease Arab and Middle Eastern states. While this carved out India’s Cold War foreign policy of opposing Israel and siding with Palestine, New Delhi’s military ties with Tel Aviv, however modest, began by the 1960s. Not only did Israel provide military assistance to India in its wars in 1962, 1965 and 1971, but Tel Aviv was also one of the first countries to recognize Bangladesh following India’s victory in its 1971 war against Pakistan. When the traditionally pro-Israel and Hindu, right-wing, Jan Sangh-led government was briefly in power from 1977 to 1979, Israeli foreign minister Moshe Dayan paid a secret visit to New Delhi in August 1977 to further expand bilateral ties.

While Prime Minister Indira Gandhi mostly maintained her father’s pro-Palestine position, her son and successor Rajiv Gandhi met his Israeli counterpart in September 1985 during the UN General Assembly’s annual meeting, which was the first such open meeting between the prime ministers of the two states. Indian concerns over the fast-advancing Pakistani nuclear program are believed to have facilitated these improved ties. However, it was not until 1992—after the end of the Cold War and India’s 1991 economic liberalization—that New Delhi formally established diplomatic relations with Israel. Nevertheless, it is important to note that even without formal diplomatic relations, Indo-Israeli military ties existed during the Cold War. These ties have certainly increased in volume since the 1990s.

However, a constant theme in the history of Indo-Israeli relations has been that their public visibility has been conditioned on which party holds powers in New Delhi. Specifically, each time a Hindu nationalist coalition led by the Bharatiya Janata Party (BJP) is in power in New Delhi, the visibility of the bilateral ties increases, but not the substance. On the other hand, the Congress Party has tended to downplay India’s ties to the Jewish state whenever it holds power.

In this sense, the Modi government’s proximity to Israel harkens back to the previous BJP-led National Democratic Alliance. In 2000, for instance, BJP leader L.K. Advani was the first senior Indian minister to visit Israel since the 1992 establishment of diplomatic ties between the two countries. An Indo-Israeli joint working group on terrorism was formed that year, and in 2003, then national security advisor Brajesh Mishra delivered a speech at the American Jewish Committee underlining the potential for cooperation among India, Israel and the United States in fighting Islamist extremism.

Once the Congress Party–led United Progressive Alliance government came to power in 2004, however, Indo-Israeli ties mostly disappeared from the headlines. This was by design; in 2010, the Indian Ministry of External Affairs refused to allow Congress Party MP Mani Shankar Aiyar to ask questions about the Indo-Israeli defense relationship in parliament on the grounds that it pertained to a “state secret.” At other points during the UPA’s tenure, Israel and India openly clashed. This was the case, for instance, when Indian president Pratibha Patil called on Israel to withdraw from Golan Heights as a primary condition for peace. Despite this public bickering, Indo-Israeli strategic ties remained rock solid. In fact, in the wake of the Mumbai attacks, India’s defense purchases from Israel increased so much that Tel Aviv briefly replaced Russia as New Delhi’s largest defense supplier in 2009.

In other words, the key difference between the secular Congress Party-led coalition and the one led by the Hindu nationalist BJP lies in their public-relations management of the bilateral relationship. The former publicly downplays strategic ties between India and Israel, while the latter loudly champions its defense and strategic cooperation with Tel Aviv. Beyond these semantics, however, the Congress Party and the BJP maintain largely similar ties with the Jewish state.

Not surprisingly, then, as Narendra Modi prepared to take office, think tanks in Washington and New Delhi predicted that Indo-Israeli relations would once again become more visible. After all, the Modi government’s anti-Islam, anti-Pakistan, anti-terrorism and pro-business positions are compatible with its public enunciation of deeper defense, strategic and economic ties with Tel Aviv. Furthermore, given his historic win and the weak and fractured nature of the opposition, Narendra Modi is nearly able to single-handedly coordinate the future direction of India’s foreign policy. This allows him and his government to magnify Indo-Israeli relations in public.

Which isn’t to say that Indo-Israeli ties aren’t currently expanding, as they are and are likely to continue to do so for the foreseeable future. New Delhi is currently Israel’s largest arms customer, and talks are underway for the conclusion of a free-trade agreement that would increase bilateral trade many times over.

In addition, Israel has hailed India as a strategic partner in Asia, while China as merely a trading partner. With Modi entrenched in power, and strategic interests aligned, we are poised to see India and Israel expand on their already-strong relationship.