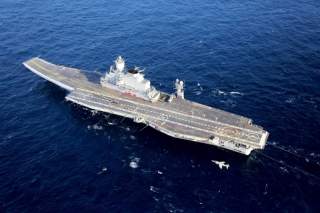 India is set to launch its first indigenous aircraft carrier later this month, according to local media reports.

On Thursday The Hindu reported that India’s first indigenous aircraft carrier, INS Vikrant, will be launched from Cochin Shipyard on May 28.

“All major equipment has gone into the vessel, which has now acquired the shape of an aircraft carrier, with a finished hull. Barring a bit of ongoing work on the superstructure, structural work is all over and the internal compartments have all been welded in,” an official at shipyard was quoted as saying.

The INS Vikrant will displace 40,000 tons and feature a short-take off but arrested recovery (STOBAR) system, rather than the catapult-assisted take-off but arrested recovery (CATOBAR) launch system used by current U.S. aircraft carriers. The ski-slope launch system will limit the INS Vikrant’s ability to launch heavy aircraft from its deck. However, the carrier will reportedly hold some 36 combat jets, which can launch at intervals between 2-3 minutes. The ship is expected to carry the Russian-made Mikoyan MiG 29 K fighter.

India had previously launched the still uncompleted carrier back in 2013, after phase I of its construction was finished. The upcoming launch marks the completion of its structure. The carrier is set to undergo testing starting in 2017, and—if everything goes to plan—will be inducted into India’s navy sometime in 2018.

India currently operates two aircraft carriers, both of which are foreign built.

Also this week, a senior Indian defense council has approved a budget for the country to build its second indigenous aircraft carrier.

(Recommended: 5 Most-Powerful Navies on the Planet)

According to local media reports, the Defense Acquisition Council (DAC), which is chaired by India’s defense minister, Manohar Parrikar, approved a slew of deals this week, including allocating 30 crore (roughly $5 million) to build India’s second indigenous aircraft carrier. The reports said the funds will go to “commencement of preparatory work for construction of Indian Aircraft Carrier 2.”

Earlier this year, India had said it will fast track production of the 65,000-ton carrier, dubbed the INS Vishal, under its indigenous aircraft carrier-II (IAC-II) project. The project is being accelerated partly to deal with China’s rapidly growing carrier fleet, as well as because of the INS Viraat’s looming decommissioning.

The INS Vishal may be nuclear powered and boast the more advanced catapult-assisted take-off but arrested recovery (CATOBAR) launch systems. The United States has recently expressed an interest in sharing carrier technology with India.