India and Pakistan: Inching Toward Their Final War? 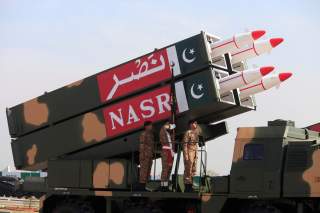 Both India and Pakistan have between 120 and 140 nuclear warheads, according to estimates provided by the Arms Control Association. However a report produced in 2015 by the Carnegie Endowment for International Peace and the Stimson Center asserts that Pakistan may be outpacing India in terms of its nuclear stockpile, and may possess 350 nuclear warheads in the next five to ten years. A 2016 SIPRI report confirmed the assessment that Pakistan has more nuclear warheads than India.

However, what distinguishes the two neighbors’ nuclear-weapons programs from each other is not so much the pace of production or the size of the stockpiles, but their radically different nuclear doctrines. The major difference between the two countries’ nuclear doctrines is that while India has renounced first use of nuclear weapons, Pakistan has refused to do so by reserving its right to use nuclear weapons in the face of India’s conventional superiority.

So far, uncertainty regarding Pakistan’s nuclear threshold is the principal factor preventing a major conflagration in South Asia. Pakistan’s refusal to disavow first use of nuclear weapons, and its emphasis on amassing tactical nuclear weapons and short-range missiles as a corollary of its nuclear doctrine, can be explained in light of its conventional-force inferiority vis-à-vis India. It is in fact a mirror image of the American nuclear doctrine as applied to central Europe during the Cold War. The United States refused to disavow first use of nuclear weapons, and deployed tactical nuclear weapons in central Europe on a large scale, because of NATO’s presumed inferiority in terms of conventional power vis-à-vis that deployed by the Warsaw Pact.

But for Pakistan, the uncertainty introduced by its nuclear doctrine has achieved another major objective as well. It has provided Pakistan with the shield behind which terrorist groups armed and trained by Islamabad, such as Lashkar-e-Taiba and Jaish-e-Muhammad, can engage in acts of terror that create mayhem not only in Indian-administered Kashmir but also in other parts of India. The fear of escalating a conflict with Pakistan to the nuclear level has prevented India from retaliating to these provocations with the massive use of its superior conventional force.

India desisted from retaliating against terrorist bases or Pakistani military installations even when a massive terrorist operation launched from Pakistan targeted India’s financial capital, Mumbai, in November 2008. This attack lasted for more than sixty hours and left at least 174 people dead.

However, it seems that the logic of this deterrence is fast eroding. Attacks such as the one in Mumbai, and subsequent assaults on Indian military installations in Kashmir and elsewhere, have also provided justification for India’s hard-line Hindu nationalists to heighten anti-Pakistan rhetoric, and putting pressure on the Indian government to intensify its military response. In the past few months, Indian retaliatory attacks have targeted not only terrorist bases but also Pakistani military facilities, causing significant casualties among Pakistani forces.

The escalation in the last two years in terror attacks, especially by Jaish-e-Muhammad, with the obvious connivance of the Pakistan army, on Indian military targets in Kashmir and surrounding Indian states has made the situation very perilous. In the past several months, terrorist groups operating from Pakistan have undertaken several such major attacks, causing significant loss of life among Indian security forces.

A major terrorist attack on the Uri camp in Jammu and Kashmir in September 2016, which left seventeen military personnel dead, motivated the Indian government to reassess its strategy for responding to such attacks. On September 29, 2016, India launched its first publicly acknowledged “surgical strike” against terrorist bases in Pakistan. Although there had been speculation that India had conducted such strikes earlier as well, this was the first admission by New Delhi that it was ready to launch major retaliatory attacks against targets in Pakistan and Pakistan-occupied Kashmir.

In the latest incident, in February 2018, Jaish terrorists attacked an Indian military camp in Jammu; five army personnel and four militants were killed. In retaliation, the Indian army destroyed a Pakistani army post with the help of rocket launchers, killing, according to Indian sources, twenty-two Pakistani personnel. This tit-for-tat exchange is reaching dangerous proportions.

So far, the Pakistani military has downplayed Indian incursions and retaliatory attacks and refused to recognize their seriousness, because it does not want to appear weak in the eyes of the Pakistani public, which is then likely to clamor for revenge. However, the Pakistani military cannot continue to downplay Indian attacks, especially in light of the increasing fatalities. There is the danger that at some point, either by miscalculation or by design, an Indian surgical strike in Pakistani territory will push the Pakistani military—which controls the nuclear weapons—to retaliate in force.

If a full-scale war erupts, at some point Pakistan, unable to counter superior Indian conventional forces, could resort to battlefield nuclear weapons, as its doctrine proclaims. While India subscribes to a no-first-use doctrine, it has made it abundantly clear that it will massively retaliate against any use of battlefield nuclear weapons by Pakistan without making a distinction between tactical and strategic nuclear weapons. This strategy, as enunciated in a statement issued by the government of India on January 4, 2003, is designed to inflict unacceptable damage on the enemy.

Former Indian national security advisor Shivshankar Menon elaborated this strategy in his memoirs: “India would hardly risk giving Pakistan the chance to carry out a massive nuclear strike after the Indian response to Pakistan using tactical nuclear weapons. In other words, Pakistani tactical nuclear weapon use would effectively free India to undertake a comprehensive first strike against Pakistan.”

This is a very scary scenario. Pakistan’s overreliance on its nuclear deterrence, especially its refusal to subscribe to the no-first-use doctrine, when combined with its reckless support for terrorist groups attacking Indian military and civilian targets, could unintentionally usher in a nuclear winter—and spell doom not only for South Asia, but for a much wider area surrounding the subcontinent.