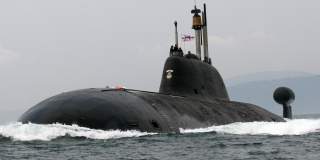 A key American partner, India, is set to conduct another missile test that will have a wide range of consequences on regional dynamics for years to come.

India’s new K-4 nuclear-capable, submarine-launched ballistic missile is expected to have a range of 3,500 kilometers, a serious improvement over its current operational missile of the same kind.

When coupled with India’s burgeoning nuclear-powered ballistic missile submarine program, India is set to seriously increase its second-strike capability in the coming years.

This trend aligns with India’s ongoing efforts to modernize its military with particular focus on naval power. A heftier military capability will extend India’s national influence and potentially rival China.

Based on the Arihant’s design, these will most likely be used in naval bastions, with cover provided by other naval vessels and aircraft in the Bay of Bengal or near the Andaman and Nicobar islands. These submarines lack the necessary speed and stealth capabilities to effectively defend themselves against hostile attack submarines.

That is why the increased range of the K-4 is so significant. It would give India the capability to strike targets in China or Pakistan from the Bay of Bengal in the event of war. India is also expected to increase naval facilities on the Andaman and Nicobar islands for this purpose.

Some have argued that this new capability from India could lead to more destabilization and conflict in the region rather than less, forcing an arms race in anti-submarine weapons or adding a destabilizing element to future crises.

While that may be the case, second-strike capability is a priority for India due to its policy of “no first use” with its nuclear arsenal. In order to maintain deterrence, it has to ensure that its arsenal cannot be neutralized by a preemptive strike.

Nuclear-powered ballistic missile submarines have secured this capability for the U.S., Soviet Union/Russia, and China for years, and India seems set to cultivate this technology for its own security.

As the U.S. looks to India to play a more active role in the Asia-Pacific region, this growth in capability will enhance India’s ability to step into that role, further increasing the potential of the U.S.-India strategic partnership.