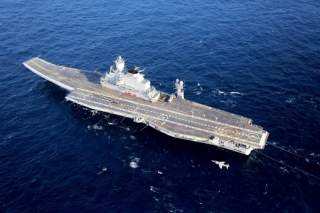 On Wednesday, India undocked its first homegrown aircraft carrier, INS Vikrant, after all structural construction of the ship was completed. An unnamed Indian official was quoted by The Hindu as explaining:

“Almost 90 percent of works below the fourth deck, all underwater works, is over. Major equipment have gone in. Cabling, piping, electrical works, heat and ventilation works will take place now. Delivery of systems and components for the aviation complex designed by the Russian Nevoske design bureau is expected anytime now.”

Citing an official from Cochin Shipyards Limited, which manufactured the ship, India’s Economic Times reports that, INS Vikrant “will undergo a series of fitment and trial processes before it is ready for propulsion and inducted into the Navy.”

As the Indian media is fond of boasting, the INS Vikrant makes India only the fifth country to indigenously design and build an aircraft carrier after France, the United Kingdom, Russia and the United States.

China also operates an aircraft carrier, but the structure was purchased from Ukraine (former Soviet Union) in the 1990s. However, it is widely believed that China is currently building its own aircraft carriers.

When completed, the INS Vikrant will be 40,000-tons, with a length of 260 meters and a width of 60 meters. As the Economic Times report notes: “It has two take-off runways and a landing strip with three arrester wires, capable of operating STOBAR [Short-takeoff-but arrested recovery] aircraft including the indigenous LCA, as well as a range of helicopters with hangar facilities.”

Furthermore, as Ankit Panda notes over on The Diplomat, “Once completed, the Vikrant will carry up to 36 fixed-wing jets, including India’s MiG-29 K and India’s indigenous Light Combat Aircraft, the Tejas. The carrier will additionally carry up to ten helicopters, either Kamov Ka-31s, Westland Sea Kings, or indigenously-built Indian Dhruvs.”

(Recommended: Japan Is Running out of Fighter Jets)

The INS Vikrant is the first of two Vikrant-class aircraft carriers India plans to construct. The second one, the INS Vishal, is currently in its design phase. However, the Indian government recently approved “commencement of preparatory work for construction” of the second aircraft carrier. Unlike the INS Vikrant, the Vishal may be nuclear powered and could displace 65,000 tons. It may also boast the more advanced catapult-assisted take-off but arrested recovery (CATOBAR) launch systems.

The undocking of the INS Vikrant, which was delayed a couple of weeks, marks the end of its second phase of construction. After undergoing testing, the vessel is expected to be inducted into the Indian Navy sometime in 2017. Given India’s defense procurement history, including that of its Indigenous Aircraft Carrier (IAC) project, one should expect this deadline to ultimately be missed.