India Unveils Its 'Robot' Tank: Could It Be a Game Changer? 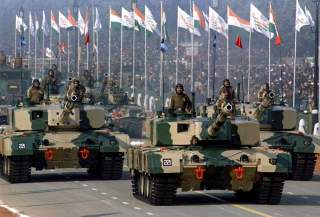 India has unveiled an unmanned armored vehicle—and it's a big one.

While many military robots look like toys or little NASA Mars rovers, the Muntra is a full-sized armored vehicle. The Indian press refers to the Muntra as a "tank" and somewhat resembles a Russian BMP armored personnel carrier. It's unarmed for now, but does come in three versions: surveillance, mine clearing and operating in nuclear- or chemical-contaminated zones.

The DRDO Web site describes the Muntra as the “the first unmanned tracked vehicle from DRDO.” The UGV, or unmanned ground vehicle, “has a very diverse range of technologies and systems incorporated in it, including electro-optics, sensor fusion, electro-mechanical actuators and communication systems.”

The Muntra also has “dynamic power management” to optimize power usage—though the power source and engine aren't described—and an Indian-developed geographic information system for navigation. In addition, “various failsafe mechanisms are incorporated in the Muntra UGV to ensure safe and error-free operations.”

The Times of India said the Muntra “has been tested and validated at Mahajan field firing range in Rajasthan under dusty desert conditions where temperatures touched 52 C (125.6 Fahrenheit). The Army comfortably tele-operated the vehicle. It has surveillance radar, an integrated camera along with laser range finder which can be used to spy on ground targets 15 kilometers (9.3 miles) away.”

Neither DRDO nor Indian media have stated that the Indian military will purchase or field the Muntra, though the Times of India noted interest on the part of Indian paramilitary forces engaged in a long, bloody struggle against Maoist Naxal insurgents. “That will require a few modifications,” the news site added.

What’s also interesting is the path that India has taken by opting for a full-sized unmanned armored vehicle. For clearing minefields, a tank-sized vehicle might offer advantages in survivability and in the ability to carry mine-clearance equipment. Russia, for example, has developed the Uran-6, a bulldozer-sized vehicle for mine clearance and explosive ordnance removal.

The downside is that big vehicles are expensive for such a hazardous mission as mine clearance, compared to smaller robots such as a modified Husky UGV. For surveillance missions, a smaller vehicle might carry fewer or less powerful sensors, but it would also be less easy to detect and more able to to operate in congested terrain such as narrow streets or forests.

Perhaps more importantly, there is no suggestion that the Muntra can function with any degree of autonomy. It's a remote-controlled surveillance and engineering vehicle. The next generation of tanks, like the next generation of combat aircraft, may very well be unmanned. This will require an entirely new level of sophistication.