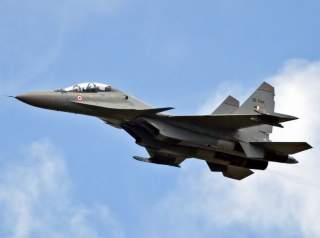 Indian fighter jets will soon be equipped with the world’s fastest cruise missile.

According to Indian news outlets, New Delhi India recently developed a modification for its Sukhoi Su-30 MKI fighter airplane that will allow it to carry the Indo-Russian BrahMos supersonic cruise missile.

The BrahMos missile will be tested from the modified Sukhoi Su-30 MKI plane this year. According to Sudhir K. Mishra, CEO and managing director of the Indo-Russian joint venture BrahMos Aerospace Private Limited (BAPL), “It will take about four to five months to complete the instrument flight test, the dummy test and the actual flight.”

The BrahMos is one of India’s most important missiles. It is a short range—it has a maximum range of around 290 kilometers—ramjet supersonic cruise missile that can be launched from submarines, ships, aircraft or land. It is one of the world’s fastest missiles, and can reach speeds of up to to Mach 2.5 to 2.8, which is three and a half times faster than the United States’ Harpoon cruise missile.

The BrahMos missile also has the capacity of attacking surface targets as low as 10 meters in altitude.

The BrahMos has a two-stage propulsion system, and—according to Russian media outlets—has a “solid-propellant rocket for initial acceleration and a liquid-fueled ramjet responsible for sustained supersonic cruise. Air-breathing ramjet propulsion is much more fuel-efficient than rocket propulsion, giving the BrahMos a longer range than a pure rocket-powered missile would achieve.”

The high speed of the missile is thought to give it “better target-penetration characteristics than lighter subsonic cruise-missiles.”

The new Indian modifications to its fighter airplanes increases the BrahMos’ utility against land-based targets. In May 2015, the Indian army successfully tested a version of the BrahMos with steep-diving capability. This would allow it to take out targets hidden behind mountain ranges. The Indian government has placed many BrahMos missiles in the mountainous state of Arunachal Pradesh on its northeast border with China, in addition to its border with Pakistan.

In another development, France has agreed “in principle” to equip the BrahMos with cutting-edge guidance technology.