India's Air Force Is Getting Supersonic Cruise Missiles (Thanks to Russia) 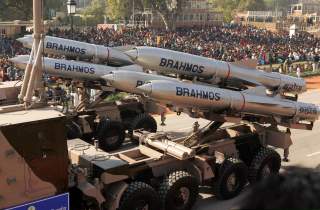 India has conducted the first test of its air-launched BrahMos supersonic cruise missile, according to India's prime minister.

On November 22, India’s press office announced that a BrahMos Air Launched Cruise Missile (ALCM) was test fired for the first time from a Su-30MKI fighter aircraft.

“Delighted on the successful maiden test firing of Brahmos ALCM from Su-30MKI. Congratulations to all those associated with this remarkable feat,” the press release quoted Prime Minister Shri Narendra Modi.

The maiden test was expected following reports in Sputnik News and the Indian Express, which said that two modified Sukhoi-30MKI planes had been armed with BrahMos missiles in anticipation of tests against ground and naval targets near the Bay of Bengal. However, there have been numerous reports throughout this year that the first air-launched BrahMos tests were imminent, but these apparently never materialized. The Indian Express report said that Russian scientists were on the ground in India to observe the test, lending credence to the more recent reports.

The BrahMos is a two-stage supersonic cruise missile that was jointly developed by India’s Defense Research Development Organization and Russia’s NPO Mashinostroyenia. Capable of traveling at speeds of Mach 3.0, the Brahmos is said to be the fastest cruise missile in the world. For instance, Russia and India Report has said: “The BrahMos’ 3000 km per second speed – literally faster than a bullet – means it hits the target with a huge amount of kinetic energy. In tests, the BrahMos has often cut warships in half and reduced ground targets to smithereens.”

Similarly, Sebastien Roblin has noted that BrahMos is roughly twice as heavy as America's Tomahawk cruise missiles and travels at four times the speed, giving it a tremendous amount of kinetic energy. Roblin also pointed out that “the BrahMos’s ability to maintain supersonic speeds while skimming at low altitude makes it very difficult to detect and intercept. To cap it off, the BrahMos performs an evasive ‘S-maneuver’ shortly before impact, making it difficult to shoot down at close range.”

India had already tested a ground-based version of the BrahMos missile against a naval target in April of this year, and the Indian Navy is also in the process of integrating the cruise missile onto its ships. Compared to these versions, the air-launched variant is lighter (2.5 tons compared to 2.9 tons) in order to fit on the Su-30MKI planes. Some sources have said that the air-launched BrahMos will also feature more rear fins for aerodynamic stability. Su-30s were first flown with BrahMos missiles on board last year, and the test firing of the missile from the jets is the logical next step in the development process.

The plan to modify the Su-30 to carry the Brahmos missiles was first hatched back in 2010, when India’s Strategic Forces Command (SFC) submitted a proposal for two squadrons of Su-30s to be put under its command. Later, in 2012, India’s cabinet approved the project to modify 42 Su-30s to carry 216 BrahMos missiles. According to a 2015 Times of India report, the integration project was mostly carried out by BrahMos Aerospace, with HAL also contributing crucial modifications.

The aforementioned Sputnik report said that so far India has only modified three Su-30MKI aircraft to carry the BrahMos missile. However, Delhi now aims to make fifty Su-30s capable of carrying the Indo-Russian missile. India is also hoping to eventually have two hundred BrahMos-capable aircraft overall.

At the Dubai Airshow earlier this month, Alexander Maxichev, co-director of the BrahMos Aerospace Joint Venture, said that was Russia was planning on beginning to deliver the air-launched missiles to India’s Air Force in early 2018. “The Indian Air Force has signed a contract on the delivery of air-launched BrahMos cruise missiles from January 2018. The missiles are designed to arm about 50 Su-30MKI fighter aircraft modified for their use,” Maxichev said, according to the Diplomat, which cited Russian media outlets. Other sources said the missiles would undergo dozens of tests before deliveries began.

Many analysts have pointed out that the air-launched BrahMos missiles are theoretically capable of carrying either conventional or nuclear warheads. There is no indication that India plans to arm the air-launched BrahMos missiles with nuclear warheads, and doing so would be inconsistent with its No First Use declaratory policy. At the same time, some observers, most notably Vipin Narang, have suggested that India is at least considering acquiring counterforce capabilities. And, as Narang has argued, “BrahMos is one hell of a counterforce weapon,” even without a nuclear warhead.

This fact has not been lost on Indian media outlets. For instance, when reporting on the coming test, Zee News noted: “The Sukhoi-BrahMos integration, according to defence experts, will enable IAF to penetrate deep inside enemy territory to deliver a blow to their vital installations from stand-off range. The combination is expected to also carry out air combat operations within and beyond visibility range—providing IAF with the ability to attack targets which have a strong air defence cover.” The same report noted that the BrahMos-equipped Su-30s will “add ‘precision-strike-down’ capabilities for targets at a considerable distance.”