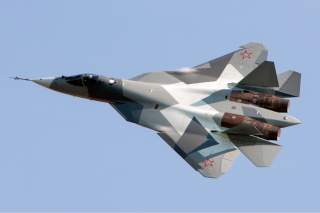 By my calculation, about 79% of India's combat aircraft squadrons and 96% of its main battle tanks are of Soviet-design, a legacy of New Delhi's close relationship with Moscow in the 1970s and 1980s. A country's defense choices can define the shape of its armed forces for decades to come. This is an important lesson for Indian leaders to heed as they consider the future of the Indian Air Force (IAF), a service that set out a highly ambitious doctrine in 2012, but appears to be shrinking ineluctably year by year. What is especially troubling is that problems are visible across the low, medium, and high end of the IAF combat fleet.

At the high end is the Fifth Generation Fighter Aircraft (FGFA), part of Russia's PAK-FA program (pictured) whose first prototype flew in 2010 and has been in testing since. India is notionally co-developing the aircraft, with some suggestions it's willing to invest tens of billions of dollars into the project. In practice, India's role has grown increasingly limited to particular areas of the aircraft like tires and radar coolant.

In recent years, there have been growing signs of discontent in India: “the Russians treat Indians like they are children and the IAF officials with the gold braid on their caps are used to being treated with excessive deference and the Russians do not do that.” Others were concerned about turning the IAF into an all-Russian fleet for another generation, the risks of betting heavily on an unproven platform, and more specific doubts over the aircraft's engines, stealth features, weapons carriage, radar, and safety. Unsurprisingly, then, in September 2014, the IAF reportedly slashed its prospective orders from 10 squadrons (around 220 aircraft) to 6-7 (126- 147 aircraft) and then, in August 2015, to just three (63 aircraft) – in total, a 70% drop in numbers for what is supposed to be the stealthy apex of Indian air power in the 2030s and beyond.

Things are looking just as confusing at the middle end of the spectrum. India had planned to buy 126 French Rafale aircraft as part of its long-running tender for Medium Multi-Role Combat Aircraft (MMRCA) tender. But that deal dramatically changed shape in April 2015, when Indian Prime Minister Modi – reportedly cutting out Defense Minister Manohar Parrikar – agreed a deal to buy just 36 Rafale in flyaway condition, cancelling the overall tender in July.

That raised two big questions. First, would even this rump deal survive? There have been numerous reports that the two sides are stuck on the price and other issues, while Paris' hand has been strengthened by agreements to sell the Rafale to Egypt and Qatar. Second, what happens to other 90 aircraft that were part of the original deal: will India just settle for fewer jets, or make up the difference somewhere else?

Sweden has offered the lighter and cheaper Gripen, which was part of the original MMRCA competition, while Parrikar has even suggested, intriguingly, that “some of it can be replaced by even proper stockpiling of missiles.” Two scholars at India's Observer Research Foundation (ORF) have recently written a report on India's indigenous Advanced Medium Combat Aircraft (AMCA), but this project is probably a good quarter century away from completion and of little relevance to the medium-term problem.

Finally, trouble is afoot at the lower end too. India spent decades developing its indigenous Light Combat Aircraft (LCA), later named the Tejas, as a replacement for its large but ageing and accident-prone fleet of MiG-21s. Two squadrons of the Tejas are scheduled to arrive before 2020, and four squadrons of a higher-end Tejas Mark II in the mid 2020s. But IAF officers widely express skepticism, even scorn, at the quality of the Mark I, and the Mark II is increasingly delayed and will struggle to live up to the promise. Hindustan Aeronautics Limited (HAL), which developed the Tejas, has tried to push a slightly improved Mark IA variant onto the IAF, and even suggested that this could obviate the need for the Mark II altogether, but this seems unlikely to be met with enthusiasm by those who actually have to fly the aircraft in combat.

Put these three issues together, and the scale of the problem becomes apparent. The IAF presently operates around 37 combat squadrons, expected to fall to 32 to 35 (estimates vary) by the end of the year. Its 'sanctioned strength' was supposed to be 42 combat squadrons by 2022. On present trends, this looks to me to be entirely unattainable. MiG-21s are retiring quicker than other aircraft are coming in. Even if the 90-aircraft 'Rafale gap' is filled, I struggle to see how India gets above the mid-30s in squadron numbers by 2020. And after that point, India will start losing its dedicated ground attack aircraft (5 MiG-27 and 7 Jaguar squadrons). The IAF has shown little interest in procuring dedicated replacements for the strike role, suggesting that multi-role aircraft like the Su-30MKI and Rafale will have to take up the slack – underscoring the problem of numbers.

In his 2011 report on the MMRCA deal, Dogfight, American analyst Ashley Tellis suggested that, “in terms of raw numbers alone, the IAF must plan on confronting by 2020 as many as 1,500 fourth-generation Pakistani and Chinese fighters.” Even if we generously assume that India can stay at 37 squadrons around that date, that would still be around half of that number of aircraft. Chinese participation in an India-Pakistan war is not necessarily likely, but India would be negligent not to consider the possibility and allocate air defense assets accordingly. And as academic Walter Ladwig explored in an excellent paper earlier this year, India's superiority over Pakistan in modern aircraft has fallen from 4:1 in the early 2000s to less than 2.5:1 today. That ratio is likely to fall further.

Numbers aren't everything in air combat, but they certainly matter. Consideration of the air balance could, for instance, shape Indian decisions over the feasibility and effectiveness of punitive air strikes on Pakistan in response to a major terrorist attack. Another long-term implication could be that India has less 'surplus' air power for power projection in the Indian Ocean region, especially during periods of heightened tension on its land borders.

In recent years, India's military modernization has been portrayed as massive, comprehensive, and unstoppable. But much of this has been about replacement of obsolete platforms rather than numerical growth, and the growing cost of a smaller number of key platforms – particularly combat aircraft – means that even massive spending can produce limited results. Barring a major crisis that prompts India to reverse the steady 25-year slide in the percentage of GDP it spends on defense (now at an all-time low of 2.4%), New Delhi will have to choose to make sacrifices elsewhere if it is serious about plugging the gaps in the IAF. The Army, which continues to consume over half of the defense budget, would be a reasonable place to start.