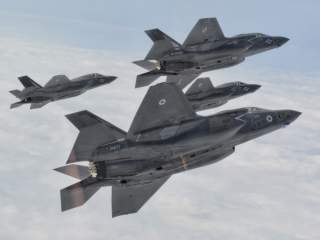 Pakistan wants to buy Lockheed Martin’s stealthy fifth-generation F-35 Joint Strike Fighter. But the South Asian nation’s chances of acquiring the new American-built warplane are fairly remote. Not only would export of the F-35 to Islamabad compromise the stealth fighter’s technology to Beijing, it could also destabilize the security balance in the region.

While Pakistan is focused on modernizing its air force with the Chinese-developed JF-17 Thunder, it is considering three possible options to acquire fifth-generation fighters. According to Islamabad’s chief of the air staff (CAS) Air Chief Marshal Sohail Aman, who spoke to the Pakistani daily The News, the country has started negotiations with the United States to acquire the stealthy single-engine F-35.

The Pentagon’s Joint Strike Fighter program office—which manages the F-35 and coordinates with its foreign partners—could not immediately comment on the matter. However, Joe DellaVedova, spokesman for the JSF program, said, “it's not ringing any immediate bells.”

Meanwhile, the U.S. State Department would not comment on the matter. “As a matter of policy, the Department of State does not comment on proposed or requested defense sales or transfers, unless they have been formally notified to Congress and we have completed all necessary administrative and technical details with recipient partner nations,” said Julia Mason, a State Department spokesperson.

The Defense Security Cooperation Agency would not return calls, but congressional sources said that they would be shocked if the United States were to export the F-35 to Pakistan. One senior congressional source noted that Pakistan works very closely with China on various aerospace development programs. As such, it is very unlikely that the United States would consider selling Pakistan the F-35; the risk of technology transfer to China is far too great.

While the F-35 is often derided for its myriad technical glitches, schedule delays, massive cost overruns and astronomical price tag, the jet incorporates some of the most advanced military technology ever developed by the United States. The aircraft’s radar and electronic warfare systems are extremely capable—and the Pentagon is not willing to compromise those systems.

Moreover, the nuclear-capable F-35 could potentially tip the balance of power on the Indian subcontinent. With its stealthy airframe, the F-35 could deliver a nuclear payload into to neighboring India with little to no warning—which could further destabilize an already tense relationship between the two powers. Indeed, the F-35/nuclear bomb combination has been criticized by arms control experts like Hans Kristensen, director of the Nuclear Information Project at the Federation of American Scientists. Moreover, the F-35 is not likely to be cleared for export to America’s allies in the Persian Gulf because of the Israeli security concerns.

Realistically, Pakistan’s best bet at acquiring a fifth-generation stealth fighter is probably either the Chinese J-31 or the J-20. However, the Russian Sukhoi T-50 PAK-FA might also be a possibility is Moscow were willing to alienate its Indian allies. The Russians have been discussing a Su-35 sale to Islamabad, so it is not out of the question. But Pakistan’s chances of buying the F-35 are fairly close to nil.