Indonesia Refuses to Bow to China in the South China Sea 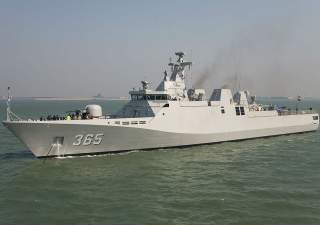 A Chinese fishing boat came under fire last Friday while fishing in waters off the Natuna islands, a 272-island archipelago off the northwest coast of Borneo in the South China Sea. The island archipelago contains some 70,000 residents and is administered by Indonesia.

On Sunday, China's Foreign Ministry Spokesperson Hua Chunying described the incident as such, “While operating normally in China’s traditional fishing grounds in the southwest of the South China Sea on June 17, Chinese fishing boats were harassed and shot by several Indonesian navy vessels. One Chinese fishing boat was damaged and one crew member shot injured, while another fishing boat and the seven people onboard were detained by the Indonesian side.”

As a result of the incident, Beijing lodged a strong protest with Jakarta through diplomatic channels, claiming the Indonesians “violated international laws including the UN Convention on the Law of the Sea (UNCLOS) and the Declaration on the Conduct of Parties in the South China Sea (DOC). China strongly protests and condemns the abuse of force. China urges the Indonesian side to stop taking actions that complicate, exaggerate the dispute and undermine peace and stability, and handle the fishery issue at sea in a constructive way.”

The New York Times reported that Chinese nationalists were outraged by the use of force by the Indonesian side. A user wrote via Weibo (China’s Twitter-like microblogging platform) “You call yourself a big and strong nation, but how come a small country like Indonesia dares to slap your face?” In the same Times article, another Weibo user reportedly posted, “Where’s the hawkish faction in the military? It’s your turn to make an appearance now.”

Yet the fishery issue is not so straightforward as the nationalists would like to believe. While Beijing lays claim to some 90 percent of the South China Sea with its self-proclaimed “nine-dash-line”, or “cow’s tongue”, Beijing recognized in 2015 Jakarta’s claim to the Natuna island chain, asserting that “the Chinese side has no objection to Indonesia’s sovereignty over the Natuna Islands.” While the islands are located outside the “nine-dash line”, they also generate a 200-mile exclusive economic zone, or EEZ, which protrudes into the waters claimed by Beijing.

Beijing, however, is a signatory to UNCLOS, and under UNCLOS, islands with populations are entitled to a 200-mile EEZ, which grants Indonesia and its fishermen exclusive rights to the fishing resources within that zone. Furthermore, the concept of “traditional fishing grounds”, put forth by China’s Foreign Ministry, is not recognized under UNCLOS.

At that time, China’s Foreign Ministry also made the argument that the incident occurred within traditional Chinese fishing grounds and the Chinese coast guard ship assisted the seized Chinese fishing boat without entering Indonesian territorial waters— despite being a mere four kilometers away from an Indonesian island. Also, by using its own coast guard vessel as a battering ram, Beijing was in indirect violation of the Collision Regulation convention under the International Maritime Organization.

Just last month, an Indonesian frigate fired warning shots at a Chinese fishing trawler when it refused to stop fishing near the Natuna islands, and the vessel confiscated with its eight crew members were detained.

Some analysts speculate Jakarta’s strong response represents a new sea change in foreign policy toward China. Indonesian authorities have traditionally downplayed similar incidents occurring in 2010 and 2013 (which resulted in the release of detained Chinese fishermen), in part over concerns Beijing could cut investment in Indonesia— China is Indonesia’s largest trading partner.

However, the new Indonesian president, Joko Widodo, is determined to build Indonesia’s maritime power and to continue its tough approach to illegal fishing started in 2014. His vocal Minister of Fishery and Marine Affairs Susi Pudjiastuti, has drawn wide support for her crackdowns on illegal fishing, and has been active publicizing any incidents on social media and in the press.

Some believe the encroachment of Chinese fishermen in Indonesian waters is deliberate and intended to further Beijing’s maritime territorial claims. The commander of the Indonesian navy's Western fleet, Achmad Taufiqoerrochman, believes Beijing has “given its blessing” to “structured” incursions by Chinese fishing boats. An unnamed senior U.S. State Department concurred, saying, “I think it's a disturbing trend to see Chinese fishing vessels accompanied by coast guard vessels, used in a way that appears to be an attempt to exert a claim that may not be legitimate,” in a statement during a conference call to journalists in Southeast Asia.

On Thursday, Indonesian President Joko Widodo held a high-level cabinet meeting on an Indonesian warship sailing in the Natuna Islands—in apparent defiance of Chinese complaints over Indonesia’s “abuse of force”. Perhaps Jakarta can afford to play tough while Beijing frets over a forthcoming decision by an international tribunal over a case filed by the Philippines. Manila is seeking a ruling from the court in The Hague that “declares that claims in in the South China Sea must comport with UNCLOS, which would invalidate China’s nine-dash line; classifies maritime features occupied by China as rocks, low tide elevations, or submerged banks, but not islands; and declares the Philippines’ right to operate inside of its EEZ and continental shelf as outlined by UNCLOS without Chinese harassment.” A decision is expected by the end of this month—and will likely go against Beijing which has already stated it will not be bound by the ruling.

Should Beijing lose the court case filed by the Philippines, and should further encroachments into Indonesia’s EEZ occur by Chinese fishing in “traditional fishing grounds”, we could see Jakarta also taking Beijing before the same international court to further deteriorate Beijing’s legal standing (and any claimed international support) over its “nine-dash line”. Better to fight it out in the courts than the high seas.