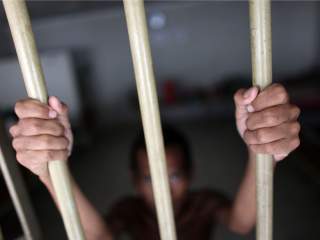 The picture of Sunakim (alias Afif) reloading his gun while maneuvering with an expression of menacing intent will be an enduring image of the Jakarta attack in mid-January.

Having served five years of a seven-year sentence for attending a jihadi training camp in northern Sumatra in 2010, the West Java native was released from prison less than six months before his involvement in the deadly assault in Central Jakarta.

Remissions for good behavior are common in the Indonesian justice system, though according to a former prison-mate, Afif had pledged allegiance to ISIS, refused to participate in prison programs (including communal prayer sessions) and was known to have struggled with anger issues.

This failure to recognize warning signs has put a spotlight on Indonesia's efforts to manage convicted extremists and the government’s recently announcedplans to boost funding for so-called prison-based 'de-radicalization' programs. But where are existing efforts focused, and how would extra resources best be spent?

Initiatives to engage with incarcerated extremists have been operating ad hoc for over a decade in Indonesia, though the first attempt to institutionalize a project came in 2013, when the national De-radicalization Blueprint was published by the National Counterterrorism Agency (Badan Nasional Penaggulangan Terorisme, BNPT).

The 122-page booklet outlined the agency's strategy for reforming prisoners convicted of terrorism-related offences, and presented the task as an ideological struggle with a strategy incorporating four stages.

First, the identification phase is meant to involve collecting data and determining each prisoner's level of ideological commitment. This is followed by a process of rehabilitation, which aims to “develop moderate understandings and attitudes” among prisoners and their families, so they “become inclusive, peaceful, and tolerant” citizens.

The somewhat Orwellian sounding re-education stage is next and seeks “transformations of thought, understanding and attitudes,” yet the description of the process is largely identical to that of the rehabilitation stage.

Finally, re-socialization aims to reintegrate prisoners with society upon the completion of their sentence, which also comprises lengthy duplications from the previous two stages, but highlights the need to involve communities to “remove suspicion and fear on one hand and develop empathy and mutual respect on the other hand.”

The Blueprint suggests the inclusion of vocational training and the promotion of personal development, but the priority appears firmly placed on a “persuasive approach” whereby “discussion and dialogue” attempt to alter the mind-set of prisoners.

Yet research has shown processes of radicalization are wide-ranging and involve social and emotional forces that are often antecedent to the adoption of an ideological framework, which in many cases is only partially understood anyway.

Factors such as the pursuit of status or personal significance, the camaraderie of belonging to an underground network, the desire for revenge or adventure, and the adolescent development of identity have all been identified as recurring themes. Ideology may facilitate these processes, but it's not necessarily the source of motivation for initial involvement.

A problem with targeting ideology during interventions is the likelihood of backlash. Kurt Braddock has drawn upon Psychological Reactance Theory (first developed by Jack Brehm in the 1960s) to describe how persuasion-based de-radicalization efforts can prove counterproductive, as participants may entrench their positions in the face of a threat to their perceived autonomy.

Instead of challenging ideas, some practitioners endorse approaches centered on behavior. Such interventions are seen as more likely to bring positive change because they focus on practical issues such as promoting constructive life goals and reducing negative emotions.

One respondent in a study conducted last year by Zora Sukabdi on rehabilitating extremists in Indonesian prisons appeared to support this theory: “Changing our heart and love for Allah and jihad is impossible, but changing our behaviour so we stop bombing is possible, in fact we can.”

Interventions need to be targeted appropriately to make this approach effective. The 2013 Blueprint stated that its identification phase sought to pinpoint the individual circumstance of each prisoner, yet the little available information about how programs are actually run suggests that broad-brush strokes have been applied more often than personalized engagement.

This point was even raised by a participant in Sukabdi's research: “. . . the brothers cannot be all counseled in the same way. We are all different . . . It is ridiculous that all brothers are ask [sic] to be waiters or cooks, it does not match their talent, it is a waste of money.”

Inmate management is also a crucial issue. Integrating extremists with the general prison population throws them into a pool of potential recruits, while segregating problematic prisoners may result in the closing of ranks and devising of plans. This is clearly a difficult dilemma, but through the creation of detailed case files on each prisoner, workable combinations may be ascertained to mitigate the predicament and to ensure that specific interventions are suitably targeted.

Equally important is the establishment of a workable risk assessment tool for evaluating prisoners prior to release. In 2012, the Indonesian Government introduced Regulation 99/2012, which stipulates that prisoners convicted of terrorism must pledge loyalty to the state of Indonesia before securing release. This has created resentment among prisoners, who have reacted by either refusing to partake in programs, or by simply signing it with no intention of remaining loyal, as was most probably the case for Sunakim as he negotiated his way to freedom.

In 2011, a team from Corrective Services New South Wales assisted the Indonesian Corrections Directorate with implementing the promising VERA-2 risk assessment system, which involves a comprehensive set of indicators to measure the likelihood of recidivism. The program appeared to collapse in 2013 and a robust system of prisoner evaluation is yet to be established.

A viable procedure that assesses risk can inform the extent to which released prisoners need to be monitored, another area that is clearly lacking in Indonesia. Sunakim and his three accomplices reportedly all visited the influential ideologue Aman Abdurrahman at his maximum-security prison in December 2015. This meeting may not have happened if an appropriate management plan for released prisoners had been in place.

The BNPT is allegedly in the process of updating its De-radicalisation Blueprint, which could be released in the coming month or so. While it is tempting to target individual ideological fervor and believe that arguing away radical views will stop the violence, prison-based interventions may meet more success if they focus more on constructive post-release aspirations. But these will need to be individually targeted.

Funding does not appear to have been a primary concern for the BNPT, but additional resources would be useful if they ensured detailed prisoner profiles are established, an effective pre-release risk assessment strategy is operationalized and that those who are released are monitored appropriately.

Cameron Sumpter is a Senior Analyst at the Centre of Excellence for National Security (CENS). He holds an MA with first-class honours from the University of Auckland, where he wrote his thesis on prison-based disengagement strategies, focusing on the experiences of Indonesia. This article first appeared the Interpreter.