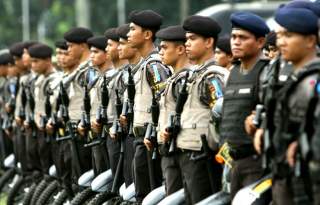 For the third time this year, the Indonesian navy has faced off against Chinese fishing vessels trawling within the 200-mile Exclusive Economic Zone surrounding the Natuna Islands. The latest incident occurred on 17 June when an Indonesian warship pursued and fired warning shots at the Chinese vessels, which were ultimately confiscated and their crews detained.

Indonesia and China continue to butt heads on official interpretations of the incident. Indonesian Foreign Minister Retno Marsudi used the aftermath of the spat to reiterate Indonesia’s position on the South China Sea issue: as Indonesia shares no overlapping territorial waters with China, it’ll remain a non-claimant state. China’s foreign ministry took an alternative view, stating that ‘China and Indonesia have overlapping claims for maritime rights and interests’ in the waters surrounding the Natunas. As Beijing expands upon its claim that those waters are a ‘traditional Chinese fishing ground’ and Indonesian lawmakers urge the government take a firmer stance on the disputed waters, it’s important that the Indonesian government actively canvasses its options.

Currently Indonesia appears to stubbornly stick to a position of ‘hollow neutrality’. This is fundamentally a ‘see no China’ policy wherein it rejects the notion of provoking or confronting China over contested waters. Regardless of whether Indonesia continues down this path, it’s likely that the number of incursions will continue to rise within the boundaries of Indonesia’s EEZ—especially as the Permanent Court of Arbitration (PCA) prepares to hand down its ruling on the Philippines v. China case. In other words, China will continue to take advantage of Indonesia’s uncertain posture. China’s acknowledgment of overlapping claims indicates that perhaps Beijing doesn’t see the waters off the Natunas as part of Indonesia’s EEZ, which aggressively expands its previous claim that the area is a ‘traditional fishing ground.’ The now-disputed waters have the potential to increasingly become a hotspot where China can demonstrate its resolve.

Complicating Jakarta’s position is the poor coordination evident in cross-departmental responses to China’s maritime incursions. As Foreign Minister Marsudi repeats her stance on Indonesia’s non-claimant status, Maritime Affairs and Fisheries Minister Susi Pudjiastuti has argued that she ‘will not consider relations between countries in this matter,’ and that the incursions are ‘a serious offense’. To have both ministers on such different pages spells trouble for a solid and consistent approach that works in Indonesia’s interests.

Of course, Indonesia could opt to speak with one voice on the matter. Pudjiastuti (and others) are attempting to reframe the incursions in public discourse. The issue is currently being presented merely as an economic maritime resources dispute. There have been few strident assertions about protecting Indonesia’s sovereignty of the kind that we saw at the beginning of Jokowi’s presidency. Avoiding that kind of tough talk means economic ties with Southeast Asia’s largest growth engine go relatively unharmed. Should Indonesian leaders shift to talking about the incursions as a political, territorial sovereignty dispute, Indonesia takes a greater risk—but still stands to gain. That’ll be particularly important as China increasingly seeks to enforce its maritime claims.

Indonesia should make clear that its money is on international law. By upgrading its South China Sea policy to reflect the rapidly changing maritime environment in which it has a serious stake, Indonesia signals to states seeking to challenge the boundaries of its EEZ (read: China) that such an action is an incursion upon Indonesia’s territorial sovereignty. It would strengthen its position that states choosing to ignore those boundaries are subverting the regional rules-based order established by UNCLOS and supported by ASEAN.

Both Indonesia and ASEAN stand to benefit from pitching their tents in the camp of international law. As an influential, de-facto lead of ASEAN, Indonesia can promote, within the group, the idea of putting necks on the line for the sake of a resolute stance—perhaps a second round of attempting to clarify the Association’s position on the South China Sea after last week’s disappointing U-turn.

But while change is tempting, there are many reasons why Indonesia is unlikely to alter its policy stance on the South China Sea. By shedding its status as a non-claimant, Indonesia could place itself in the uncomfortable position of justifying China’s request to negotiate over the maritime boundary. By revamping its South China Sea policy to take a harder line with China, Indonesia would then be legitimizing China’s claim that a border dispute exists—something that many Indonesian foreign ministers have been both denying and attempting to avoid. There are also routes for Indonesia to maintain strategic ambiguity by ‘forging partnerships with multiple powers’ (PDF) with security interests in the region, which wouldn’t require it to jump headlong into an explicit border clash with China.

Furthermore, it’s highly unlikely that Jakarta would become ASEAN’s new leader on the South China Sea. ASEAN’s fracturing on the issue are perfectly illustrated by Cambodian Prime Minister Hung Sen stating that his country wouldn’t support the PCA’s ruling. The diversity in stances in ASEAN shows that the issue runs deeper than even the Association’s Fundamental Principles, which include mutual respect for the sovereignty and territorial integrity of all nations and the settlement of disputes by peaceful manner, can encompass. So, really, why would Indonesia toss its hat in the ring?

Indonesia must decide soon whether or not to upgrade its South China Sea policies, as developments in the region are quickly shaping the strategic environment. Indonesia can choose to act preventatively and establish a firm, unified whole-of-government approach, and unequivocally throw its weight behind international law. Alternatively, it can maintain its neutral stance.

China can and will up its game in enforcing the boundaries of the nine-dash line claim—especially as the PCA’s 7 July ruling draws nearer. How Indonesia chooses to act next will set an important precedent in the region. And forming a firm and unambiguous stance on dealing with encroachments on water that will only become more contested should be at the forefront of Indonesian policymakers’ minds.