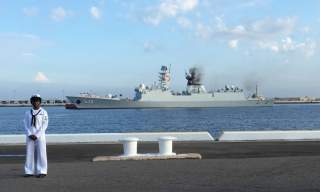 The difference between freedom of navigation operations (FONOPs) and warships transiting under 'innocent passage' sounds arcane and legalistic. But this wonkish distinction is now central to understanding the nature of the U.S. Navy’s activities in the South China Sea last week and going forward — with a critical bearing on how they are perceived in China and beyond.

USNI News, Defense News and Graham Webster all recently noted that the USS Lassen was undertaking innocent passage when it sailed past Subi Reef on 27 October. This surprising revelation has not been officially confirmed but is understood to have been widely corroborated by sources in the U.S. Navy, Department of Defense and Capitol Hill.

It matters because the regime of innocent passage under the UN Convention on the Law of the Sea is specific to a country’s 12-nautical mile (nm) territorial sea. This allows warships to enter without notice but under constrained conditions, including that passage should be continuous and expeditious, with no use of on-board weapons, aircraft or “any act aimed at interfering with any systems of communication or any other facilities or installations of the coastal State.”

It was widely assumed that Subi Reef, as a low tide elevation now extensively built upon by China, was chosen deliberately as the location for the U.S. Navy’s FONOP in order to demonstrate on clear legal grounds that the U.S. does not recognize Beijing’s (or rival ‘claimants’) jurisdiction over the surrounding waters. It is integral to the demonstration value of FONOPs against excessive claims that warships carry out “the normal range of activities which they would on the high seas, including manoeuvring, the use of active and passive sensors and even the operation of shipborne helicopters.” FONOPs and innocent passage are quite different things.

However, according to Defense News:

“New details about the Lassen’s transit became available Oct. 30 from a U.S. Navy source, who said the warship took steps to indicate it was making a lawful innocent passage with no warlike intent. The ship’s fire control radars were turned off and it flew no helicopters. Although a US Navy P-8 Poseidon maritime surveillance aircraft was in the area, it did not cross inside the 12 nautical mile limit.”

When Chinese warships entered U.S. territorial waters off the Aleutian Islands in September they behaved consistently with innocent passage, which may have encouraged a desire to respond in kind. The signal difference is that no-one, China included, contests the U.S. entitlement to a 12-nm territorial sea in the Aleutians. This is no mere technicality. If it transpires that last week’s U.S. Navy Spratlys mission is regarded officially as innocent passage then much of the legal impact will have been blunted for this and future FONOPs, which unnamed US defence officials have said since are likely to be conducted “about twice” per quarter.

In fact, their demonstration value could be thrown dangerously into reverse if Beijing drew the conclusion that the conduct of innocent passage amounts to customary acceptance of a de jure territorial sea around Subi Reef and other submerged features or low-tide elevations under China’s control in the Spratlys. Innocent passage may have appealed at a political level in Washington, as less provocative than FONOP assertions conducted in the normal operational mode. But labelling U.S. actions around the Spratlys expressly as innocent passage could be handing a legal concession to Beijing.

If Washington is intent on following through on freedom of navigation credibly, it is of critical importance that U.S. operations in the Spratlys are not described or conducted in these terms. Not only would the impact on Beijing be diminished, but also maintaining support from third parties would inevitably become harder as they adopt a watch-and-wait strategy. A widespread sense of relief among many that the Obama Administration has finally grasped the nettle by authorizing the U.S. Navy to assert freedom of navigation in the South China Sea could quickly give way to intensified doubts about the conduct of its Asian security policy.

For their part, Chinese officials have thus far maintained steely ambiguity on the precise nature of their sovereignty claims in the face of both the U.S. Navy operation, and last week’s decision by the Permanent Court of Arbitration to hear the Philippines’ case, challenging China’s excessive claims in the South China Sea. And yet, as was pondered initially in The Interpreter and later by other observers, broader reaction in China has hinted at movement away from the maximalist positions based upon historic rights and the U-shaped line. These tentative gains suggest that calibrated pressure on China can have a positive effect. Introducing a mixed signal now on innocent passage shows extremely poor judgement.

To give the White House its due, there is always a wider politico-legal context to consider. In the higher strategy, U.S. FON operations are probably meant to play a corralling role in coaxing China 'off-ramp' towards a position of compromise with its maritime neighbours and encouraging a meaningful modus vivendi between the US and Chinese navies, whose senior ranks have been in regular communication over the past week. The White House may be concerned about China’s challenges in the South China Sea but is probably inclined to take a wider, more political and transactional view of the U.S.-China relationship than Congress, or the security arms of government which are professionally focused on China’s breakneck military build-up, and coercive behaviours in the cyber and maritime domains - including islands constructed on submerged features in the South China Sea.

Once again, the White House’s aversion to risking crisis and confrontation in U.S.-China relations is likely to explain the mixing of signals on innocent passage. Unfortunately, the greater legal and political risks to this approach do not appear to have been given the same consideration. Freedom of navigation is not as simple as it looks. Future operational assertions must avoid repeating the mistake.