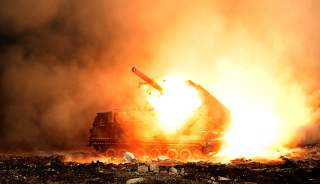 In a cloud of smoke and flame, the salvo of rockets streaks skyward from the battery of U.S. Army multiple rocket launchers. But as the projectiles arc through the air and descend toward the enemy positions below, each rocket spews a cloud of armed quadcopter drones. As the quadcopters unfold their rotors and begin their descent, their sensors lock on to enemy tanks. Finally, the drones land on top of the tanks before detonating.

This sounds like something that Empire would use in a Star Wars movie, but it’s actually a weapon that blurs the line between an artillery shell and a drone. And the U.S. Army wants it now.

The Army recently put out a research proposal for a rocket armed, not with high explosive, but rather with a payload of quadcopters. Each quadcopter would unfold its rotors and home in on an individual target. Each drone would also be armed with a small Explosively Formed Penetrator, a special type of warhead used in some antitank missiles and also in IEDs that insurgents used in Iraq and Syria to destroy armored vehicles.

“The missile will release the quad-copter payload during flight, after which the quad-copters must decelerate to a velocity suitable for deployment (unfolding), identify potential targets, maneuver to and land on the target, and detonate onboard EFP munition(s),” according to the Army proposal. “Potential targets include tank and large caliber gun barrels, fuel storage barrels, vehicle roofs, and ammunition storage sites.”

The rockets would be fired from either the Guided Multiple Launch Rocket System or the Army Tactical Missile System, according to the Army proposal, titled “Cluster UAS Smart Munition for Missile Deployment.” This would make them capable of being launched from regular U.S. rocket artillery rather than specialized launchers.

Phase I of the project will be to design a quadcopter that can survive the shock and vibration of being launched inside a rocket, as well as ensuring that it has enough electrical power to function despite being jammed in a small space. Phase II will address how the quadcopter unfolds its wings, flies through the air, detects a target, and then lands on it and explodes.

In a truly bizarre touch, the Army also suggests that the concept could have civilian uses. “While the baseline use is inherently military in nature, other payloads could be used for remote sensing into dangerous/hazardous areas,” the Army says.

Drones have already become as integral a part of the modern battlefield as riflemen and tanks. Now used for reconnaissance and surveillance, they are also being developed as “kamikaze drones” that orbit a battlefield before being ordered by troops on the ground to hit their targets.

But this project is something else. Flocks of little suicide copters landing on top of enemy tanks like metal spiders does sound either comical or nightmarish, depending on your point of view. But if artillery shells or rockets can spew clouds of attack drones, then the air over the battlefields of the future will be filled with the hum of attack drones autonomously searching out their targets.

And there won’t be much place for the humans.