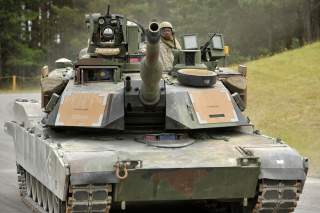 General Dynamics Land Systems (GDLS) will start to deliver the first production M1A2 SEP v.3 Abrams to the U.S. Army starting in 2017. Out of a total of nine prototypes built, the company has delivered seven prototype tanks for field-testing at the Yuma Proving Ground in Arizona and the Aberdeen Proving Ground in Maryland.

According to Kotchman, the Army will start to field the new Abrams model starting in the third quarter of fiscal year 2020. However, unlike most Pentagon acquisitions programs, there is no such thing as entering into “low rate initial production” or entering into “full-rate production.” Instead, the Army is developing the SEP v.3 as an Engineering Change Proposal (ECP).  “Instead of LRIP/FRP these are ECP vehicles and initial production deliveries commence in 2017,” Kotchman said. “Fielding is expected to begin in Q3 FY2020.”

Right now, GDLS is on contract to build six initial upgraded tanks, but eventually the Army hopes to remanufacture its entire M1A2 SEP fleet into the new configuration. “We have a contract for six pilot vehicles and are working follow on orders. The Army currently plans to put the V3 capability into all of its M1A2SEP vehicles,” Kotchman said.

Though the M1A2 SEP v.3 was developed as an ECP, the upgrade adds significant new capabilities to the Abrams. GDLS was originally awarded the contract for the Abrams ECP1a Program in Sept. 2012. At its core, the program was an engineering development program to improve the Abrams’ Size Weight and Power-Cooling (SWaP-C) capacity as the tank was running out of room to grow. “The ECP1a program is characterized as the ‘Power Package’ to include improvements to various systems to aid the soldier in future fights,” Kotchman said.

According to General Dynamics, some of the major improvements within the ECP1a program include increased power generation and distribution capacity. “Soldiers have a requirement for additional electrical power in order to use advanced technologies and improved capability in the future,” Kotchman said.

The SEP v.3 ​also has improved survivability and lethality compared to older Abrams models. Kotchman said that the vehicle has advanced abilities to defeat improvised explosive devices and has an upgraded armor package. The addition of a new Ammunition Data Link supports use of advanced new ammunition types that are either already fielded or will be fielded in the near future.

Meanwhile, life for maintenance crews gets easier with the addition of a new Vehicle Health Management System (VHMS) that supports off vehicle reporting of maintenance status. New Line Replaceable Modules (LRMs) help to improve on-vehicle diagnostics and repair, which should greatly improve vehicle availability due to decreased downtime. The addition of a new under-armor Auxiliary Power Unit (APU) helps to reduce fuel consumption and should lessen the wear and tear on the tank’s Honeywell AGT1500C 1500shp gas turbine engine.

Kotchman deferred comment about whether the Army needs to develop new tank to defeat the new Russian T-14 Armata as the Germans intend to. Berlin is clearly concerned by the Armata and is hoping to develop an entirely new main battle tank to counter it. However, Kotchman did say that the M1A2 SEP v.3 is just one of the upgrades in the pipeline for the Abrams. However, he deferred comment to the U.S. Army about the nature of those potential additions. “The Army is considering additional engineering changes that would add capability to the Abrams tank,” Kotchman said.