Inside the U.S. Navy's Radical Plan for ‘Moore’s Law’ Warships 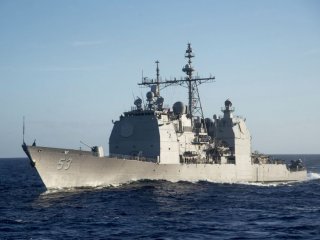 The U.S. Navy’s next generation surface combatants will be developed with information technologies baked into the core of their designs.

While the Navy’s current generation of warships like the Ticonderoga-class cruisers and Arleigh Burke-class destroyers use digital information technology, they were designed in a different era when technology did not evolve as rapidly as today. The next generation replacement for those vessels will have to incorporate digital-information technologies from the outset—and will have to keep pace with rapid technical advancements.

“That’s going to be a key part of the next generation of warships,” Adm. John Richardson, U.S. Navy’s chief of naval operations, told an audience at the American Enterprise Institute on February 12. “It will also be digitally native—or information native.”

“We’re going to have to move to an overall concept where we might deliver a platform. . . That platform might last the life of a traditional ship—twenty-five years or thirty years,” Richardson said. “But inside that—I think increasingly so—we have to make it very much more modular or adaptable to improving technologies.”

That means that while the Navy recognizes that a hull might remain in service for three decades, the service will have to swap out the sensors, weapons and computer networks onboard the vessel periodically. That suggests that the underlying hull form will have to be designed with the space, weight and power margins from the outset to accommodate new and upgraded technologies.

But as technology improves, the Navy has yet to determine if future warships will be larger, smaller or roughly the same size as current day surface combatants. New types of weapons—including next generation missiles and directed energy weapons—will force the Navy to reconsider the shape and size of its future warships, Richardson said. Since the Navy has to bake those considerations into the fundamental design of next-generation warships, that is question the service will have to examine in depth.

Richardson notes that with increasing technological capabilities and miniaturization, it is now possible to fit ever greater capabilities into smaller packages—which means smaller warships can be much more capable. Meanwhile, larger size is increasingly equating to greater vulnerability, he said. More and more, the Navy is looking at distributing capabilities over a greater number of ships. Nonetheless, it is possible that the analysis might show that a large warship has its clear advantages: “We may at the end of that, find there is sort of an intrinsic greatness to size—you can carry more stuff,” Richardson said.

The U.S. Navy will make a determination on which direction it will go over the coming decade as it gears up to build a future surface combatant that will enter service in the 2030s.