Inside the USS Donald Cook: The Navy's Missile Destroyer That Could Strike Syria 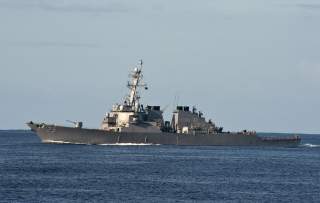 The Trump administration is weighing whether to launch a second punitive strike on Syria in response to an apparent chemical weapons attack on April 4 by the Syrian military targeting the rebel enclave of Douma in eastern Damascus.

If a strike is carried out, there is every reason to believe that destroyer USS Donald Cook may be its executor, as it is the only U.S. warship currently deployed nearby in the Mediterranean that is equipped with long-range Tomahawk cruise missiles. (Additional vessels are reportedly on their way.) The Cook could receive some unfriendly attention in return—something the ship’s crew of 276 may be familiar with after two tense earlier encounters with Russian jets.

The Donald Cook, commissioned in December 4, 1998 as DDG 75, is one of sixty-five Arleigh Burke–class guided-missile destroyers actively serving in the U.S. Navy. The 154-meter-long vessel (that’s one and half football fields!) is named after a U.S. Marine Corps officer who died of malaria while in captivity in Vietnam. He was posthumously awarded the Medal of Honor for sharing his medication with fellow prisoners and pretending seniority to draw punishments upon himself.

Destroyers are a type of agile warship originally devised a century ago as “torpedo boat destroyers” for protecting larger cruiser and battleships from smaller vessels. While today’s U.S. destroyers still perform a similar role by protecting aircraft carriers, they have also themselves become powerful surface combatants due to the advent of long-range missiles.

The Cook’s key capability regarding a Syrian strike are the Tomahawk cruise missiles stored in the ninety missile “cells” of its Mark 41 Vertical Launch System. These GPS- and inertia-guided weapons soar at 550 miles per hour (the speed of a typical airliner) about forty meters above the surface, and can strike targets over a thousand miles away with their half-ton warheads. Tomahawks have been popular with U.S. presidents, because they allow attacks on defended targets without putting American pilots at risk.

Earlier, on April 7, 2017, the Burke-class destroyers USS Porter and Ross launched fifty-nine Tomahawks at Shayrat Air Base in a retaliation for a Syrian sarin gas attack that struck the rebel-held town of Khan Sheikhoun. Russian and Syrian air defenses in Syria did not apparently attempt to shoot down any of the missiles, either failing to track them or intentionally refraining from shooting.

However, Tomahawks come at a steep price of roughly $1 million each. The inventory of Tomahawks can be rapidly depleted, and they are too expensive to rely upon for an extended military campaign. The attack in 2017 inflicted modest damage, and evidently did not disrupt the Syrian government’s activities to any great extent. If Washington decides upon a more extensive strike—if any strike occurs—then it may risk using stealth aircraft as well.

The Cook also has significant defensive capabilities thanks to its Aegis Combat System, which networks data from multiple sensors systems, including the ship’s powerful SPY-1D radar, to track approaching threats, and then coordinates firing weapons in response. The vessel’s main defensive weapon is the Standard Missile-2, a radar-guided antiaircraft missile with a maximum range over one hundred miles that is also stored in the Mark 41 cells; the SM-2 can also engage enemy ships. Any incoming missiles that penetrate longer-range defenses would finally have to contended with last-ditch defensive fire from the Cook’s two rapid-firing twenty-five-millimeter chain guns and SeaRAM short-range heat-seeking missiles.

The Cook has also been upgraded to serve in the Ballistic Missile Defense role, providing air defense for both ground and naval targets from high-flying ballistic missiles, including types designed to carry nuclear warheads. Besides carrying additional sensors to perform this mission, the Burke’s Mark 41 cells include large, super-high-speed SM-3 missiles, which can defend airspace out to a range of 380 or even over 1,300 miles, depending on type.

In fact, the Donald Cook is part of Destroyer Squadron 60, which is permanently stationed in Rota, Spain, and tasked with providing all of Europe with a limited degree of protection from ballistic-missile attacks. The squadron’s deployment triggered a complaint from Moscow that the vessels were an affront to its nuclear-deterrence capabilities.

The Cook also has a five-inch Mark 45 deck gun, and is one of a minority of destroyers still equipped with sea-skimming Harpoon antiship missiles (range: seventy-five miles); it also has three torpedo tubes and a rocket-assisted ASROC missile for engaging enemy submarines. However, though Cook has a flight deck, it lacks the helicopter hangars found on newer Burke-class destroyers.

Donald Cook is distinguished for its involvement in two relatively high-profile incidents with Russian forces. On April 10, 2014, it cruised into the Black Sea in response to Russia’s seizure of the Crimean Peninsula from Ukraine. Two days later, a Russian Su-24 supersonic fighter-bomber spent ninety minutes executing twelve low-altitude mock attack runs while its wingman orbited nearby.

The Su-24 “Fencer” supposedly carried an electronic-warfare pod called the L-175 Khibiny, designed to disrupt and distort hostile radars. After the incident, Russian media hyped a false report based on a parody social-media account claiming that the Khibiny had somehow jammed the Cook’s systems, causing them to shut down and inspiring its “twenty-seven crew” to resign. Despite credulous reporting by certain Western news outlets, the account does not add up—according to Russian media, the Khibiny is not even deployed on the Su-24—and the U.S. Navy reported it was simply untrue.

Two years later, on April 12, 2016, the Cook was performing exercises in the Baltic, in international waters eighty miles from the Russian enclave of Kaliningrad, when it was repeatedly buzzed by two Su-24s, as well as a Ka-27 helicopter. One again, the Fencers flew dangerously low over the ship, and Moscow and Washington snarled desultory threats to each other. You can see video from the incident here.

Depending on decisions made in Washington, the destroyer may soon be at the center of yet another clash with Russia.