Inside the USS Gerald Ford, the Navy's Most Powerful Aircraft Carrier Ever 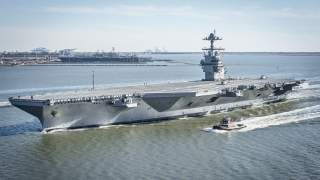