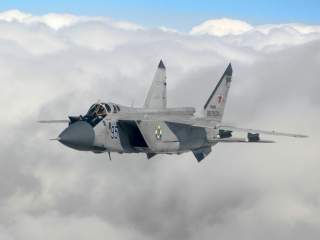 Russia is proceeding with the development of a new interceptor to replace the Mikoyan MiG-31 Foxhound.

In fact, according to Russian industry officials, work on the new warplane is well underway. Russia’s reason for embarking on the project is simple: the MiG-31 has been out of production since 1994, but Moscow still has to defend its vast airspace. If anything, the demand on the MiG-31 fleet has increased since the fall of the Soviet Union, Sergey Korotkov, Russian Aircraft Corporation-MiG’s director general told the Moscow-based newspaper Vedomosti.

“The MiG-31 is in great demand to meet our country’s air defense needs. But it went out of production some time ago, although the functions assigned to the MiG-31 will still be required,” Korotkov said. “We need a new aerial system to solve these problems—which have, in fact, grown—based on new principles and new materials. And we understand what kind of airplane it will be: work is already underway to determine the aircraft’s design.”

Korotkov didn’t offer any further details about the interceptor, but he made it clear that the Russian aerospace industry believes that manned aircraft will be around for a long time to come. Moreover, a human will be in the loop to control an unmanned aircraft for the foreseeable future, Korotkov said—which is in line with Western thinking.

“I think manned and unmanned combat aircraft will coexist for a long time. Today, even though the intelligence of combat systems is growing rapidly, they still need a human to make a final decision,” Korotkov said. “For simple tasks, unmanned aircraft will be enough, but for complex ones, a human presence—either onboard a plane or a drone operator—is still needed.”

Meanwhile, MiG is continuing to develop an unmanned aircraft in conjunction with Russia’s Central AeroHydrodynamic Institute (Abbreviated as TsAGI for Tsentralniy Aerogidrodinamicheskiy Institut)—which is the Soviet/Russian analogue to NASA. “MiG has always dealt with such complexes. We showed a model of the UAV Scat at the MAKS-2007 airshow,” said Korotkov, adding that MiG is working jointly with TsAGI on unmanned strike aircraft.

The question that Korotkov does not answer is: How does Moscow expect to pay for all of its expensive new development programs given the state of Russia’s economy, which has shrunk by 3.8 percent in 2015 according to the IMF.