Introducing the Successor-Class: The Largest Submarines Ever Built For the Royal Navy 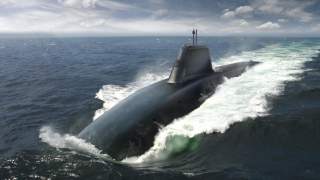 The four new boats will be the largest submarines ever built for the Royal Navy—displacing 17,200 tons with a length of about 502ft—but they will only have 12 missile tubes rather than the 16 found onboard the current Vanguard-class. The new boomers will also share technology with their U.S. Navy counterparts—the Columbia-class Ohio Replacement Program SSBNs—using a common missile compartment (CMC) design. Once completed, the new boomers will enter service in the 2030s.

“Britain’s ballistic missile submarines are the ultimate guarantee of our nation’s safety – we use them every day to deter the most extreme threats,” said British defense secretary Michael Fallon. “We cannot know what new dangers we might face in the 2030s, 2040s and 2050s so we are acting now to replace them.”

At the start of this month, the British government approved an initial £1.3 billion—roughly $1.6 billion—in funding for the new ballistic missile submarines. That initial outlay will cover long-lead items—as the CMCs—and preparing the shipyard at Barrow-in-Furness for the task of building the enormous new vessels.

“This additional financial investment by the MOD [Ministry of Defense] is an expression of confidence in our ability to build these sophisticated vessels,” said Tony Johns, managing director of BAE Systems Submarines. “We have been designing the new class of submarine for more than five years and thanks to the maturity of our design, we're now in a position to start production on the date we set back in 2011. This is a terrific achievement and I pay tribute to all those who have made this possible.”

There is not much information available about the technical characteristics of the British Successor-class design. While the 17,200-ton boats will be larger than their 15,900-ton Vanguard-class predecessors, the new SSBNs will carry four fewer missiles. Part of the reason for the vessels’ larger size is likely due to the need for enhanced stealth—larger submarines are inherently quieter. But it is also possible that the British have adopted an all-electric permanent magnet motor to drive the boat—similar to what is planned for the Columbia-class—for their new SSBNs, which might also account for the increased displacement.

Indeed, the British submarines’ PWR-3 pressurized water reactor plant is thought to draw heavily upon the technology used on the U.S. Navy’s General Electric S9G reactor plant found onboard the Virginia-class attack submarines. However, the Columbia-class will have a newer 42-year life-of-the-boat reactor that is significantly more powerful than the S9G.

The Successors are already going to be sharing their CMC modules with their Columbia-class counterparts, thus such an arrangement might not be outside the realm of the possible. Indeed, according to General Dynamics Electric Boat’ Will Lennon—the company’s vice president of engineering and design programs, who spoke to The National Interest earlier this year—the CMCs will be built in modular units of four tubes—or Quad-Packs. While the Columbia-class will use four Quad-Packs for a total of 16 missiles, the smaller British Successors will use only three for a total of 12 tubes. The tubes are the same 87-inch diameter vessels as the current Trident II D5 launchers on the present day Ohio-class and Vanguard-class, but are a foot longer—leaving some margin for a future missile design.

Other innovations found onboard the new British boomers focus on crew comforts. The new submarines will have separate classrooms and study areas, a sickbay with a doctor, a gym as well as separate berthing for female crewmembers. Additionally, the submarine will have a new lighting system to better simulate nighttime and daytime. Thus, life onboard a Successor should be more pleasant than onboard a Vanguard.