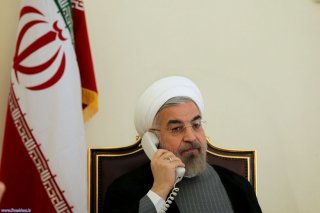 Iran’s leaders may be pleased about their inclusion in the recent Vienna talks on Syria as a sign of newfound respect from the international community.

The need for such talks in the first place was a reminder, though, of the precarious diplomatic and military position that Tehran still faces in the Levant.

In the civil war’s fifth year, Iran recognizes it will likely never recoup a territorially intact, allied state and some partition is probably advantageous. There’s no question that Iran’s Islamic Revolutionary Guard Corps’ (IRGC) is increasing its numbers on the ground, remolding Syria’s security forces in its image, deploying Shia militias from around the region, and employing Lebanese Hezbollah in part to guarantee Tehran’s leverage in any political resolution.

The difficulty is that Iran’s military advantage on the ground does not necessarily translate into the diplomatic strength needed for a favorable outcome.

Russia’s intervention has probably staved off the collapse of Syrian President Bashar al Assad’s regime. Moscow’s joint operations aim only to secure a defendable remnant state in eastern Syria and gain leverage in any diplomatic settlement. As I have argued before, Iran’s objectives are broader than Russia’s. Moscow is not terribly interested in helping Tehran spread its political and religious influence in the Levant or strengthen its position against Israel.

Assad’s status remains the heart of the matter. Most of the parties at the Vienna talks expect that the Syrian president must go after a period of time as part of any negotiated settlement. Iran is unlikely to accept this. While there is no love lost between Tehran and the Syrian president (or between Moscow and Assad for that matter), Assad is still the only game in town for Iran. Tehran lacks deep connections with the majority of Syria’s communities, even in Assad’s home Alawi community, and is unlikely to trust any leader that isn’t Assad or from his inner circle.

Since the Vienna talks last week, Iranian rhetoric has stiffened against the idea of an Assad transition in the near term. As Supreme Leader Ayatollah Ali Khamenei, an ironic defender of democracy, stated on November 1:

We believe it doesn’t make sense that other countries get together and decide about a governing system and the head of that state…this is a dangerous initiative which no country in the world would accept to be done for itself.

Syria’s Deputy Foreign Minister Faisal Mekdad echoed these sentiments while visiting Tehran November 3, stressing the Syrian people had voted for Assad in a presidential election in 2014 and had shown there was no alternative to his leadership. Damascus, like Tehran, will argue that Assad should have the right to serve out his full presidential term and possibly even run for re-election.

Khamenei and other senior leaders are also likely still smarting from acquiescing to pressuring their ally, former Iraqi Prime Minister Nouri al Maliki, to give up his premiership last year after the fall of Mosul to ISIS. The more independent-minded current Prime Minister Haider al Abadi has proven difficult for Tehran to manage. This is not a mistake Iran wants to repeat in Syria.

The deeper challenges lie with Riyadh’s implacable support for the various opposition forces and resistance to Iranian control over Syria’s revamped security and military apparatus. Saudi Arabia sees preventing Iranian dominance in Syria, and to a lesser degree Assad’s departure, as a vital interest. Tehran may even need to worry about Riyadh forcing a settlement by cutting a deal with Russia at Iran’s expense.

For Iran, it comes down to preserving several red lines that Russia may not guarantee: ensuring an allied Syrian state with Assad for the foreseeable future, maintaining support for Lebanese Hezbollah, and increasing its deterrence against Israel. Khamenei’s foreign policy adviser Ali Akbar Velayati has already indicated there are differences with Russia over Hezbollah’s role in Syria. Rumors emerging from the recent Vienna talks also indicate Russia’s position on preserving Assad may diverge from Iran’s.

The bottom-line is that almost any kind of settlement agreeable to the other parties in Vienna will likely be worse than the status quo from Iran’s perspective. The United States, its partners, and even President Putin should expect a very stubborn Tehran at the table, if the Iranians are willing to seriously negotiate at all.

J. Matthew McInnis is a resident fellow at the American Enterprise Institute, where this piece first appeared.