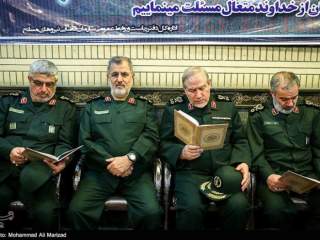 Mansour Haghighatpour, an Iranian parliamentarian and former Islamic Revolutionary Guard Corps (IRGC) commander, told a reformist-leaning newspaper last month that the IRGC had tried to leverage its political and financial influence to prevent his reelection in parliamentary elections two months ago. His crime? He had supported the nuclear deal Tehran struck with international negotiators last summer. As Iranians went to the polls Friday for the second round of elections, the Guard’s outsized influence was yet again on display.

Haghighatpour is himself far from a moderate. He was part of Ayatollah Ruhollah Khomeini’s security detail when the latter returned from exile to lead the Islamic Revolution in 1979. Haghighatpour joined the IRGC the next year, quickly rose through the ranks and took command of his own unit in his early 20s, forcing the armed opposition group Mojehedin-e Khalq into exile. In 1987 or early 1988, he joined the IRGC’s extraterritorial operations, now known as the Quds Force. Haghighatpour was subsequently deputy to its commander Qassem Soleimani in Iraq.

Haghighatpour identifies with the “Principlist” camp, the radical elements of the Islamic Republic that advocate a return to the pure tenets of the early Islamic Revolution. In 2014, he dismissed the vigilante serial acid attacks against women wearing “improper” hijabs as “minor crimes.” Last year, he described American policymakers as “hired mercenaries of … the illegal Zionist regime,” and demanded Foreign Minister Mohammad Zarif apologize for his “ugly” handshake with President Barack Obama and Secretary of State John Kerry.

Fatefully, Haghighatpour was also a member of the ad hoc committee set up to review the nuclear deal. According to his interview, the parliamentarian voted for the deal merely because he believed the supreme leader was himself inclined to approve it. He recalls this decision as his undoing, and that the IRGC sidelined him, labeled him a traitor and mobilized its political and financial influence to oust him.

Haghighatpour’s revelation is not the first instance of officials criticizing IRGC intervention into politics. At the first open session of parliament after the elections, Principlist lawmaker Avaz Heydarpour-Shahrzaei accused the Guard of actively working to oust him. A furor ensued, but Shahrzaei was embraced by members including Haghighatpour and Ali Motahari, a prominent conservative who has frequently warned about the IRGC’s involvement in politics.

The IRGC’s involvement in politics has accelerated since Ali Khamenei became supreme leader in 1989. The Guard and the Basij likely intervened in 2005 to get the hardliner Mahmoud Ahmadinejad elected president, and took the lead in violently crushing the 2009 protests against fraudulent presidential elections. The crackdown, however, shattered any remaining sense of legitimacy in the IRGC and in the Islamic Republic. Khamenei forbade the IRGC’s involvement in the 2013 presidential ballot, because he needed to restore political stability amid suffocating sanctions. But this does not mean that he is committed to significantly cutting back the IRGC’s meddling in politics.

Leading up to the February elections, Guard commanders told their forces and supporters that good candidates for political office must be “followers of the supreme leader,” and “revolutionary.” They warned against “seditionists”—namely supporters of the 2009 post-election protest—“American and English engineering,” “infiltrators,” and “reformists.”  Commanders and Friday prayer leaders demanded candidates “clearly announce their positions about" such “seditionists,” calling this their “red line.”

Finally, the Guard continues to provide guidance to the Guardian Council—which vets all candidates for ideological purity and reliably rigs elections in favor of hardliners.

The regime controls the candidate field to ensure that it does not pose a threat to the system, and IRGC-affiliated and state media outlets communicate a steady message of what is allowed and is not in the Islamic Republic. Ultimately these hardline forces wage a concerted effort to draw the line in the sand that, if crossed, will draw the Guard’s force as in 2009.

The IRGC’s regular meddling in Iranian elections should serve as a warning. The unelected deep state that it represents wields considerably greater power than the country’s elected institutions. Friday’s elections, like those in February, were therefore yet another exercise in democratic posturing in a regime in which hardline elements are growing ever more entrenched.

Amir Toumaj is a research analyst at Foundation for Defense of Democracies. Follow him on Twitter @AmirToumaj.