Iran, Russia, and the Ukrainian Crisis 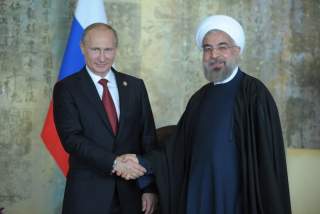 The Ukrainian crisis poses a threat to cooperation between Russia and the West on many issues of international security and, above all, to the dialogue on Iran’s nuclear program. The dialogue with Iran is led by the P5+1 (the United States, Russia, Britain, France, China and Germany) with the goal of preventing Iran from creating an atomic bomb. In November 2013, thanks to the election of the moderate Hassan Rouhani as President of Iran, these negotiations achieved their first success:  an interim agreement called the “Joint Action Plan.” The parties are scheduled to complete work on and then sign a comprehensive agreement in July 2014.

The crisis in and around Ukraine, in which Western sanctions have already been applied against Russia and relations between Russia and the West have started to resemble the Cold War, could seriously complicate further negotiations. There remain in Iran influential political groups and organizations that aim to reach the “nuclear threshold” and continue to advance toward this goal, using any conflicts between the countries of the P5+1 to their advantage.

Russia is undoubtedly against Iran developing nuclear weapons. Russia is also not a supporter of Iran’s uranium enrichment program, as it wants to sell Iran its own nuclear fuel for Iran’s Russian-built nuclear power plants (one reactor was put into operation at the Bushehr power plant, and a minimum of two more, and in the long term up to eight, reactors are planned). In 2006-2010, Russia voted in favor of six UN Security Council resolutions (including four with economic sanctions) designed to punish Tehran for continuing its nuclear program.

However, Moscow has never officially shared opinions about the military nature of the Iranian nuclear program and always prioritized diplomacy rather than economic sanctions or, especially, military force for resolving this issue. During the last several years, Moscow as aimed to play the role of a mediator between Iran and the United States, convincing Washington that it could incline Tehran to make concessions. This was one of the Russian political “trump cards” in relations with the West. However, in actuality, Iranian concessions came as a result of the election of a new president under conditions of economic crisis created by the oil embargo and financial sanctions of the United States and Europe.

During all the previous years, the Iranian issue was the subject of an intense struggle within Russia between enemies of the West, supporters of traditional ties with Iran and other Asian neighbors, and advocates of cooperation with the U.S. and strengthening the nuclear nonproliferation regime.  It is clear that, due to the Ukrainian crisis, the position of the latter group has weakened significantly.

Today the fundamental dilemma of Moscow’s policy lies in whether it is worth cooperating to achieve a comprehensive agreement with Iran under conditions of confrontation with the West over Ukraine. After all, such an agreement would primarily be a success for the United States and its allies’ policies, and would improve their relations with Tehran and sharply increase their influence in the Near and Middle East. In the course of a new Iranian president and in public sentiments, after over thirty years of isolation, pro-American attitudes and hopes for wide cooperation with the West are growing (according to a poll from September-October 2013, 80-90% of Iranians consider the reestablishment of relations with the United States necessary).

Furthermore, the removal of sanctions against Iran and the appearance of Iranian oil and gas in the world market would lead to a decrease in hydrocarbon prices or, at a minimum, would create serious competition for Russia. And hydrocarbons are Russia’s main export product, the fundamental source of its budget income, and the most important instrument of its foreign policy, including during the Ukrainian crisis.

On the other hand, the breakdown of negotiations with Iran would even more severely strain relations between Russia and the West, and would likely lead to a new war in the Persian Gulf—with extremely destructive economic and political consequences for the region and the entire world, including Russia. And, apart from the threat of war, the continuation of sanctions against Tehran harms Russian economic interests in Iran. Finally, the negotiations’ failure would not bring back Russia’s political “trump card” of a special relationship with Iran.

One must not forget that relations between Russia and Iran are much wider than the question of Iran’s nuclear program and have several hundred years of history.  Iran is the main state in the extremely unstable region neighboring Russia. Tehran has significant influence over events in the Near and Middle East, the South Caucasus, and Central and South Asia (including Afghanistan). Developments in this wide zone directly affect Russian national security, for which Islamic radicalism and terrorism remain a top threat. Additionally, Iran is a country with a largely young population of 80 million people, significant potential for economic development, and enormous reserves of oil and gas.

Shia Iran is regarded in Russia as the only counterbalance in the region to the increasing influence of the United States, Turkey, and Sunni extremism (Wahhabism and Salafism), which is particularly active in the Russian North Caucasus and in neighboring Central Asia. The unprecedented current tension in relations between Russia and the U.S./NATO has made the value of Iran as a partner even greater in Moscow’s eyes.

Additionally, Tehran is Moscow’s only ally in supporting the government of Syria, where the United States, its European partners, Turkey, Saudi Arabia, Qatar, and Al Qaeda all take the side of the armed Sunni opposition. From the beginning of the Syrian crisis until 2013, Iran provided the regime of Bashir al-Assad (an adherent to Alawi Islam, a form of Shiism) financial assistance of $17.6 billion, including a loan for purchasing Iranian oil. Tehran also provides Damascus with weapons, and military specialists from the Iranian Islamic Revolutionary Guard Corps command operations by units of Lebanon’s Hezbollah in Syria.

Syria under the leadership of Assad is one of Russia’s few remaining political partners in the Middle East, buys its weapons, and provides the Russian Navy its only international base in both the Mediterranean Sea and the world (Tartus).

Trade and economic relations with Iran are of great interest to Moscow. In the years before the Islamic Revolution of 1979, more than 60 large infrastructure projects including hydro- and thermal power plants, gas pipelines, metallurgical factories and machinery plants were built in Iran with the help of the USSR. In recent years economic relations between the two countries plummeted due to UN, EU and U.S. sanctions. Iran's share of Russia's foreign trade has dropped to historic lows, and in 2013 amounted to less than 1% ($ 1.6 billion). Major oil field development projects were canceled by Russian companies including Lukoil, Norsk Hydro and Gazprom Neft.

The interim P5+1 Agreement with Iran from November 2013 and prospects for a comprehensive agreement along with the complete lifting of sanctions offer an opportunity for Moscow to significantly expand economic relations with Tehran. Russian exports to Iran are dominated by metals (46%), food (28.2%), machinery and equipment (6.4%). Russian imports from Iran consist mainly of agricultural raw materials (71.2 %) and chemical products (10.8%) with a plan in place to buy oil products in exchange for manufactured goods (to start at 500,000 barrels a day - 12% of Iran’s oil production). A permanent bilateral commission has been created to coordinate economic relations between governmental agencies and companies in both countries.

For the future, priority has been given to the energy sector. Russian companies are planning major investments in the development of Iran’s large gas fields in order to strengthen the global position of Gazprom in competition with U.S. shale gas exports. Russia also plans to continue aiding in the development of Iranian nuclear energy, having achieved a unique position as Iran’s partner in building the Bushehr nuclear power plant during the county’s international isolation over the last decades. Deals totaling $10 billion have already been outlined for the construction of hydro- and thermal power plants. Space cooperation also looks promising, as Iran has no carriers for launching satellites into orbit and expects to cooperate with Russia on this like many other countries do. Another attractive possibility is investment in the expansion and modernization of Iran's railway infrastructure, an area in which Russia has vast experience and technical capacity.

Military technology cooperation has been of particular importance for Moscow. The sale of arms and military equipment, including nuclear technology and materials, and missiles and aircraft engines is just a portion of Russia’s high-technology exports. However, this trade is about more than money for Russia. It provides international prestige and distinguishes Russia from the community of petro-states.

Starting in the mid-1960s, the Soviet Union supplied Iran with large deliveries of armored vehicles and artillery, and built factories for the repair and production of military equipment (in Isfahan, Shiraz, Dorude, and near Tehran). After the Islamic Revolution of 1979, Russia's share of Iran’s military imports rose to 60%, and in the 1990s Iran became, along with China and India, a major buyer of Russian weapons, including fighter aircraft (MiG-29, Su-24), helicopters (Mi-17), anti-aircraft missiles (S-200, TOR-1), Kilo diesel submarines, tanks (T -72) and infantry fighting vehicles (BMP-2).