Iran and the United States Had a Very Big Week 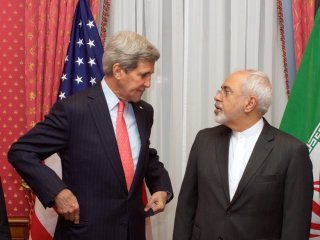 We will certainly not hear this from the ten Republican candidates running for president of the United States, but this past week proved to be an incredibly productive time for U.S.-Iran diplomacy. Indeed, the last seven days has not only resulted in several positive outcomes for the United States, but has exhibited just how markedly different interactions between American and Iranian officials have become since the JCPOA negotiating process first began three years ago.

Before President Hassan Rouhani was elected, Obama administration officials would have had a hard time justifying a simple telephone conversation with an Iranian counterpart on any matter. And if a phone call was made, there is a slim chance anything tangible would come out of it, let alone a deliverable that the White House and State Department could tout publicly.

Yet since the interim Joint Plan of Action was signed between the P5+1 and Iran in November 2013 (less than two years before the full nuclear accord would be in effect), Washington and Tehran have slowly gotten around to viewing each other as adversaries that could make deals on some selective issues rather than enemies to be shunned or ignored.

Republican presidential candidates have focused exclusively on Iran’s negative behavior, a series of escalatory actions in the region that are no doubt concerning to the security of the United States and to the stability of its allies in the Persian Gulf.  Washington needs no reminder of how dangerous the Iranians can be; over the past three months, Tehran has engaged in behavior that has added to friction that is already deeply ingrained in the U.S.-Iran relationship.  The examples seem endless: two ballistic missile tests in direct violation of UN Security Council resolutions, provocative naval exercises in the Persian Gulf in close proximity to U.S. craft and the brief detainment and interrogation of ten American sailors who happened to stray into Iranian territorial waters. None of this behavior should be excused or brushed aside by American officials, and all of it should serve as a reminder that—the Iran nuclear deal notwithstanding—Ayatollah Ali Khamenei and the Islamic Revolutionary Guard Corps still hold the cards over Iran’s decision-making process.

But by concentrating exclusively on the negative, Republicans like Chris Christie, Marco Rubio, Jeb Bush, Donald Trump and Ted Cruz don’t do the country any favors.  In fact, the rhetoric on the campaign trail and on the debate stage raises the ire to such a level that Americans may come to believe that their government is inept and incompetent on the subject of Iran—or worse, appeasers and enablers of Tehran’s bad behavior.

On Saturday, January 16, Yukiya Amano, the director general of the International Atomic Energy Agency, formally certified that Iran completed all of its nuclear obligations under the JCPOA.  The terms of the nuclear agreement are well-known to anyone who has read (or tried to read) the 159-page document: dismantlement of two thirds of its Iran’s centrifuges, the shipment of 98 percent of Tehran’s low enriched uranium stockpile to an overseas location, the removal of  the Arak reactor core, the capping the quality and quantity of the country’s enriched uranium stockpile, and the facilitation of an unfettered IAEA inspection regime across all of Tehran’s declared nuclear facilities. Bluntly put: Iran’s nuclear weapons program is now placed in a box and effectively put under the watchful eye of the international community.

The seizure of ten American sailors by the IRGC Navy and the release of several videos showing an American confession of wrongdoing rightly rubbed a lot of Americans the wrong way. The footage distributed by the Iranians, used for propaganda purposes, was undoubtedly meant to humiliate the United States and portray its Navy as weak and at the mercy of the IRGC. Yet, however distasteful those videos were, the sailors were released unharmed and unscathed fourteen hours later with their boats intact. In 2007, the UK wasn’t as lucky: their own personnel were kept under Iranian custody for weeks before being sent off in a taped ceremony where British navy personnel shook the hands of former Iranian President Mahmoud Ahmadinejad and thanked him for his hospitality. If John Kerry and Iranian Foreign Minister Mohammad Javad Zarif did not generate some kind of positive working relationship as a byproduct of the nuclear talks, there’s a decent possibility that those ten sailors would still be under Tehran’s control.

After fourteen months in captivity, having been arrested and tried on espionage charges that to say the least were unfounded and without evidence, Washington Post Tehran Bureau Chief Jason Rezaian was finally released from Iranian custody on January 16. Razaian wasn’t the only American citizen sent home: Saeed Abedini, Amir Hekmati, Nosratollah Khosrawi and Matthew Trevithick were all also freed into the care of the United States in exchange for seven Iranians who were prosecuted or charged in America for sanctions violations. The transfer was a long time in the making, reportedly occurring separate from but in parallel to the JCPOA negotiations—an attempt no doubt to use the goodwill that resulted from the nuclear track to the benefit of a possible prisoner release. The gambit worked.

Let’s be perfectly honest: Iran and the United States will not be friends or partners any time soon.  Diplomatic relations between the two countries will not be re-established, nor will the United States and Iran reopen their embassies on each other’s territory.  The Iranians continue to support terrorist groups that have killed Americans in the past, continue to invest more money and resources into its ballistic missile program and continue to launch anti-Semitic diatribes against Israel and its people.

But the past week has revealed that, on some issues, Washington and Tehran can in fact do business with each other.

Daniel R. DePetris is an analyst at Wikistrat, Inc., a geostrategic consulting firm and a freelance researcher. He has also written for CNN.com, Small Wars Journal and The Diplomat.