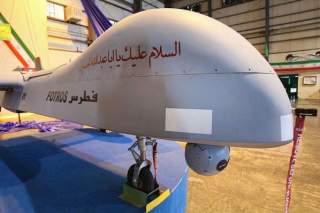 Iranian drones may soon be flying over Mexican airspace.

At least that’s according to Alaeddin Boroujerdi, the influential chairman of the Foreign Policy and National Security Committee in Iran’s parliament, who recently led a delegation of Iranian lawmakers on a 4-day trip to Mexico. The trip, which reportedly was the first of its kind since the 1979 Islamic Revolution, came at the invitation of Gabriela Cuevas Barrón, head of the Foreign Relations Committee in the Mexican Senate, who herself visited Iran on a couple of occasions this year.

The most concrete result of the trip was the signing of a memorandum of understanding promoting stronger economic, cultural and political ties between Iran and Mexico. The two sides also reportedly agreed to expand their cooperation in the oil sector.

Upon returning, however, Boroujerdi also said that Mexican officials had expressed interest in purchasing drones from Iran to use in its war against drug cartels.

“During my recent visit to Mexico they announced that [they] want Iranian drones,” Boroujerdi was quoted as saying by Fars News Agency, a media outlet close to the Revolutionary Guards, according to BBC Monitoring and Trend News Agency, an Azerbaijani-based private news outlet that regularly reports on Farsi-language Iranian news reports.

The English-language Iranian news reports on the visit did not mention drones. A review of some Spanish-language news found some articles referring to drones, but these too cited the Fars News Agency article as their source.

Without confirmation from Mexico, it’s important to view Boroujerdi’s claim skeptically, especially given that the parliamentarian also said that the “two sides stressed that the Americans have played the biggest role in the creation of Takfiri groups [Sunni extremist terrorist groups like ISIL].”

Still, the claim that some Mexican official-- particularly a potential member of the Senate-- expressed interest in Iranian drones, isn’t as outlandish as it might seem at first. Mexico has long struggled to root out the powerful drug cartels in the country, and drones have become an increasingly integral part of its counternarcotics strategy. In fact, according to some sources, “the Mexican market for drones jumped seven times from 2013 to 2014.”

Mexico’s interest in using drones to fight the drug cartels long predates 2013, however. Long before then Mexico secretly agreed to allow the U.S. to operate unarmed surveillance drones over Mexican airspace to collect intelligence on the cartels, as long as the intelligence was then passed on to Mexican officials. This agreement eventually became public setting off some outrage in Mexico where there are persistent concerns about U.S. violations of its sovereignty.

Although this practice continues, Mexico has also sought to build up its own UAV capabilities in recent years. In 2009, for instance, the Mexican Air Force secretly purchased Israeli-made Hermes 450 surveillance drones to use to spot narcotic smugglers in hard to reach parts of Mexico. Hermes, which are a popular UAV among Latin American countries, have a maximum altitude of 18,000 feet and can loiter for up to 20 hours. Mexican police also operate Israeli-made Skystar 300 surveillance aerostats and small Orbiter UAVs.

Besides Israeli-made drones, there is a nascent indigenous UAV market in Mexico. The Mexican Navy was the first institution in the country to premier a UAV, but others-- including companies like Hydra Technologies and SOS Global-- have done so in more recent years. Still, the capabilities of Mexico’s indigenous drones remain limited.

Bordering on the opium capital of the world, and strategically located to drug consuming markets, Iran-- like Mexico-- has also long struggled with narcotics smuggling.

Unlike Mexico, however, Iran has a fairly robust indigenous drone program. In fact, the Center for the Study of the Drone at Bard College has noted, “Iran has one of the oldest drone development programs in the world.” Iran’s interest and deployment of UAVs actually dates back to its war with Iraq during the 1980s, but it has become much more pronounced more recently. In April 2013 alone, it rolled out four new drones: the Azem-2, Mohajer B, Hazem 3 and Sarir H110. The next month it unveiled the Hamaseh High Altitude Long Endurance drone. The Shahed 129 UAV Iran first unveiled in 2012 is a larger version of the Hermes 450 (It is widely believed that Iran has stolen UAV technology from Israeli firms on numerous occasions) with an alleged range of 2,000 km and an endurance of 24 hours.

Nor is Iran bashful about sharing its UAVs with other countries. There have been reports that Iran has sold or helped develop drones for numerous other countries and groups, including Hezbollah, Hamas, Syria and Sudan, among others. Of particular note with regards to Mexico, Iran helped Venezuela develop a UAV.

Thus, it’s certainly plausible that some Mexican lawmaker or policymaker expressed interest in purchasing an Iranian UAV. And, Iran would undoubtedly sell Mexico UAVs were the latter interested as this would allow Tehran to relish in the fact that its drones were flying along the Mexican border. That being said, don’t expect Iranian drones to be flying over Mexico anytime soon, at least if Washington has anything to say about it.