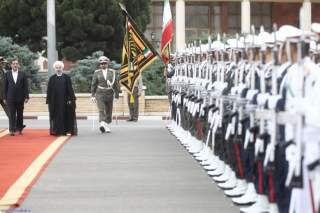 Iran is stuck between a rock and a hard place on ISIS and Iraq. Taking responsibility for security in Iraq – or even significantly contributing to it – would be a huge undertaking. But a fragmented Iraq on its border is a first-order concern for Tehran - it can’t just sit by with fingers crossed. The choice is complicated by Syria. Iran can’t continue to pursue its interests in Syria at the same level if it is mired in Iraq as well. It is likely that Tehran will have to choose, and it will choose Iraq.

To Iran, Iraq and Syria are similar challenges, except today’s crisis in Iraq is harder to solve and matters more. Until recently, Assad’s Syria has been a good friend and ally to Iran and still today, a conduit to the Mediterranean and Hezbollah. But Iraq is Iran’s backyard.

Iran has a lot to lose in Iraq by inaction. Last time Iraq’s interests were fundamentally opposed to Iran’s, there was a devastating 8 year long war. ISIS threatens Iran’s vast interests in Iraq: its significant influence over politics, in fact the country as a whole, including symbolic religious shrines, and trade, which reached $12 billion in 2013. Unlike in Syria, the majority Shia population in Iraq represents a real constituency for Tehran. Iraqi fragmentation threatens to stir up desires for independence amongst other minority communities, including in Iran, and force Tehran to double up efforts and resources in order to maintain its influence in Iraq. ISIS gains have peaked American interest in Iraq once more. Iran does not want any increased role for its US adversary in neighboring Iraq again. More importantly, the crisis threatens to spill over the 910 miles of porous border, which is poorly defended by the Iraqi police.

Iranians are terrified. Many question Iran’s involvement in Syria, but they support involvement in Iraq. Syria is an optional war: a crisis where Iran can dial its involvement up or down based on its policy preferences. It is not an existential issue. But ISIS activities in Iraq pose a real threat and a genuine sovereignty concern, something Iran hasn’t seen in a long time.

To date, Iran has invested a great deal in Syria: money, equipment and above all, political capital. While many argue this policy succeeded, it’s clear that the cost is high for Tehran. Iran’s presence in Syria has caused its regional popularity to plummet, discord amongst the elite, and rising discontent amongst ordinary Iranians questioning the use of public funds to prop up a dictator. Iran sustaining a regime it wants in power is part of its capacity to lead in the region, and so far it’s working.

But getting the result Tehran wants in Syria has been difficult. Today, it is a drain on Iranian resources and political capital. It’s no surprise that Tehran doesn’t want a repeat of Syria in Iraq. But containing the crisis in Iraq will be much harder, with many more potential pitfalls.

Today, Iran is trying to broker cooperation between all factions in Iraq against ISIS. But it is also assisting Maliki in pushing ISIS back. Tehran is providing intelligence and advisors, including commander of the Revolutionary Guards Quds Force Qassem Soleimani himself since mid-June, and military assistance. Reports confirm Iranian Su-25 aircrafts were shipped to Iraq in early July, while the first Iranian military casualty was reported a few days later. But overt Iranian involvement in Iraq further risks polarizing Iraqis and deepening sectarian tensions. In addition, Maliki’s stubbornness and overly sectarian style of governing no longer makes him a safe bet for the Iranian government, which must now find ways to ensure the survival of the current Shia-led structure.

Iraq is also high stakes because of the impact failure will have on Iran. If Iran has the kind of experience in Iraq that America had in Afghanistan and Iraq - running a shattered country - there won't be a lot left over to do much else. Involvement in both Iraq and Syria will continue to erode resources while making it impossible for Iran to pull out after such investment.

Iran cannot afford to be involved in a long, drawn out conflict on two fronts. While it is improbable that ISIS will sustain its current course, it was also improbable that they would take a quarter of Iraq. But they have and Iran is worried. Tehran can’t afford to let the crisis run its course because the risks are too high. Over the years, Iran has invested patiently in both Iraq and Syria. That's why it’s so difficult for Tehran to give either of them up. But Iran will have to choose because its resources and abilities are finite.  It will likely choose Iraq.