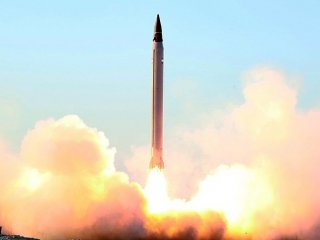 Why are the recent missile tests a problem? As I argued last summer, the two key contentious points in the currently operative United Nations Security Council Resolution (UNSCR) 2231, mean that Tehran can now argue its ballistic missiles are not deliberately designed to carry a nuclear warhead, even if they are capable of it. [The reality that there is little strategic purpose for developing missiles with ranges longer than 2,000 km –which the Simorgh eventually could reach– that would only carry conventional explosives as opposed to nuclear ones is beside the point.] The fact that 2231 only “calls for” Iran to not engage in ballistic missile activity means that launches are unlikely to merit designation as a “violation” by the UN Security Council. Tehran certainly sees it that way. Iranian leaders have been clear they believe the previous restrictions were illegal in the first place, that the new language in UNSCR 2231 is practically meaningless, and that they will never negotiate over their legitimate defensive rights to a missile program. Rouhani outlined this argument in a December 2015 open letter urging the Iranian Ministry of Defense to accelerate the program in anticipation of more US sanctions.

Rouhani points to a missing key element in the debate about what to do about Iranian intransigence: Tehran views its missile program as an essential component of its defense. Iran’s lack of a strong conventional military—one that could effectively project and sustain air, land, and sea power well beyond its borders – means that the Islamic Republic relies almost exclusively on the fear of retaliation to deter adversaries such as the United States, Israel, or Saudi Arabia. Tehran only has a few forms of effective retaliation available to it, though, namely its ballistic missiles; its ability to conduct terrorism and asymmetric wars through proxy groups such as Lebanese Hezbollah; and other unconventional means such as its developing cyberwarfare capacity. Without these retaliatory capabilities, Iran would feel strategically naked.

Preserving the core of its proxy and militia network, the so-called “axis of resistance” centered on Lebanese Hezbollah, has motivated Iran to take any action deemed necessary over the past five years to ensure its position in Syria and support President Bashar al-Assad. Preserving the missile program is considered equally as existential. We should expect Tehran to use any means necessary to protect and strengthen it.

The United States must stop thinking that countering Iran’s missile program is the same as trying to halt its nuclear program. Tehran’s effort to have the capability to build a nuclear weapon was (and may still be in the future) primarily an attempt to possess a potential deterrent against the United States, Israel, and other adversaries. Iran’s ballistic missile program, though, is not only a delivery mechanism for possible nuclear weapons, but also a primary existing method of deterring its enemies. Tehran’s defense-industrial base is already advanced enough to produce most of its missiles indigenously. The amount of coercion and dissuasion necessary to alter the Iranian leadership’s intentions about its missiles is therefore immensely larger than that needed to produce the JCPOA. No US presidential threats, no US Congressional sanctions, no US Treasury designations, no UN rebukes, no outreach, no negotiations, and no efforts to empower Iranian “moderates” will likely have any effect on Iranian willpower to expand its program.

So what can we do? Sanctions should continue to focus on the technology transfers that would allow Iran to improve its missiles’ stabilization, guidance, and solid-rocket fuel capacities. We should increase our, and our allies’, deterrence abilities through improved missile defences and counter-targeting efforts to neutralize Iran’s fixed and mobile missiles.

Iran will continue to contravene UN and US sanctions aimed at deterring ballistic missile launches. With time the threat from Tehran’s missiles will likely become worse, not better. We must accept that reality, and begin crafting strategies aimed at mitigating and responding to Iran’s missile advances. We cannot stop Iran’s missile efforts, but we can prepare for them.