Is Iran's Strategy in Iraq Adrift? 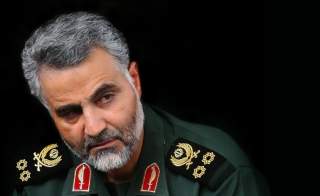 Russia may have thrown Iran a lifeline in Syria, but Putin’s aid only obscures larger problems for Tehran’s policies in the region. In particular, Iran’s policy in Iraq and its strategy against the Islamic State (ISIS) is under severe pressure. It is not clear the Islamic Republic has a good way forward.

Tehran’s activities and policies in Iraq and the Levant remain largely under Islamic Revolutionary Guard Corps (IRGC) Quds Force Commander Qassem Soleimani’s direction. Soleimaini had been riding high ever since the fall of Mosul to ISIS in June 2014. His photographs spread over social media and he was lauded in Iranian and regional press for his role in leading a hybrid IRGC advisory and Shia militia force to fight ISIS in Iraq and President Bashar al-Assad’s opponents in Syria.

This past spring, however, the commander began to disappear from view amid speculation of dissatisfaction in Tehran with his campaigns in both theaters. Iranian Foreign Minister Javad Zarif reportedly promised Secretary of State John Kerry that concluding the nuclear agreement would allow Zarif to discuss regional issues, possibly mitigating Soleimani’s influence. Others speculated that retired former IRGC Commander Mohsen Rezaei donned his uniform again at the behest of Supreme Leader Ayatollah Ali Khamenei to keep an eye on Soleimani.

While there may be some truth to these points, Soleimani’s troubles are more linked to problems Iran is having navigating Iraqi domestic interests in general. Baghdad, like Damascus, recognizes its government would have fallen by now if not for Iran’s intervention. This does not keep most Iraqi leaders from resenting the heavy hand Tehran plays in their security and political decision-making.

In the midst of last summer’s revolt against then Iraqi Prime Minister Nouri al-Maliki’s failed leadership and the loss of Mosul, Khamenei acquiesced to Maliki’s forced demotion to Vice President. Soleimani and other Iranian leaders expected his successor Haider al-Abadi to remain a pliable client. To Khamenei’s likely regret, this is turning out not to be the case.

Iraq’s Prime Minister demonstrates a willingness to stand up to Iran’s influence. Abadi is pursuing major political and anti-corruption reforms that would abolish the constitutional positions of vice presidents and check the power of the Maliki-aligned judiciary. Iraqi authorities began inspecting cargo on Iranian planes arriving in Baghdad last month. Abadi is even rumored to have kicked Soleimani out of a cabinet meeting—rebuking the Iranian for the presumption of attending and criticizing his reform plans.

Following Abadi’s August 9 decision to eliminate Nouri al-Maliki’s position as vice president (which still needs judicial approval), Maliki made a well-publicized visit to Iran, meeting with Supreme Leader Khamenei’s senior foreign policy advisor, Ali Akbar Velayati and other Iranian officials. The prime minister is rightly worried that Tehran is plotting a Maliki restoration, perhaps by using the Iranian-aligned Iraqi Shia militia groups under Soleimani, such as Khataib Hezbollah, that are deepening their grip on large parts of the Iraqi’s security forces amidst the government’s campaign against ISIS.

What Tehran did not count on is the broad support among Iraqi Shia and their religious leaders for reform--and for pushing back against Iranian influence. Abadi has cleverly tapped into this sentiment, first by gaining open support for his agenda from Shia Islam’s most influential leader, Grand Ayatollah Ali Sistani, and then by tacitly supporting the large public protests against corruption in Baghdad and elsewhere. (Sistani had already questioned Iranian policies in Iraq earlier in the year.) This political contest is far from over, but Iran’s options to force change at the top have become much more complicated.

Iran’s increasing tensions with Turkey over its policies towards Iraqi Kurdistan and escalating involvement in the Syrian civil war may also be crudely playing out on the streets Baghdad. An armed group using Shia slogans abducted eighteen Turkish workers in north Baghdad on September 2, claiming the action is in response to Turkish actions in Iraq. The assailants, using a previously unknown name, are likely members of an Iranian-backed Shia militia linked to Soleimani. Qais al-Khazali, the head of another Iraqi Shia militia (and Iranian proxy group) Asa’ib Ahl al-Haq, denounced the kidnapping and denied involvement, but Khazali also condemned Turkey as Iran’s greatest enemy, and demanded Ankara stop the flow of militants from Turkey to Iraq, cut the flow of oil from Iraqi Kurdistan, and order the lifting of a siege on two Shi’ite villages in northwest Syria. Two of the Turkish workers were found last week in Basra—and there are attempts at another ceasefire in those Syrian villages—but the whole incident only raises further alarm among Iraqis about Iran’s intentions and activities.

These political black eyes only compound Soleimani’s military challenges on the front lines. The campaign his militias and the regular Iraqi security forces are waging against ISIS is stalemated at best. The Quds Force commander may be reprioritizing the Syrian front as it becomes more desperate, even moving some of his Iraqi proxy units back to Syria to fight alongside Lebanese Hezbollah.

Soleimani is not sidelined, though. His recent trips to Moscow to apparently coordinate the new Russian military intervention in Syria and his reemergence in social media pictured with Khata’ib Hezbollah commander (and his de facto deputy in Iraq), Abu Mahdi al-Muhandis, testify to this. Soleimani’s strategies in Iraq appear, though, increasingly incoherent, impolitic, and ineffective, as well as out of line with the interests of our partners in Baghdad or the region.