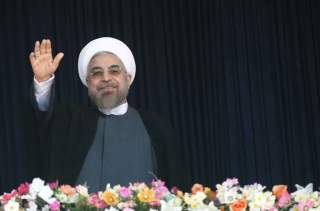 Machiavelli warned centuries ago in his seminal work The Prince: When threats are identified well in advance, they can be quickly addressed—but “when, for lack of diagnosis, they are allowed to grow in such a way that everyone can recognize them, remedies are too late.”

There is perhaps no better example of the dramatic consequences of such a failure than the current situation with the Islamic State (also known as IS, ISIS or ISIL). Symptoms were overlooked or dismissed. No regimen was implemented to prevent the disease from spreading. ISIL metastasized into a global threat.

Boko Haram in Nigeria, which just declared its own Islamic caliphate and is wreaking havoc beyond Borno and Yobe, also illustrates Machiavelli’s point. By late 2012, it had carried out numerous deadly attacks, prompting Congress to highlight the escalating danger Boko Haram posed and the need to designate it as a foreign terrorist organization. It took more than a year and many more victims for such a determination to take place.

Regrettably, the United States appears intent on repeating the same mistakes with Iran.

July 20 came and went without an agreement on Iran’s nuclear program. The multiparty talks were extended for four months and additional sanctions relief provided to the Iranian regime. This marks yet another victory for Tehran. Once again, Iranian negotiators fooled the rest of the world into believing that it is a responsible stakeholder, rather than a gross human-rights violator and state sponsor of terrorists determined to be nuclear-weapons capable.

The regime’s immediate priority is influencing or dictating developments in its neighborhood—Iraq, Gaza strip, Syria, Lebanon and certain Gulf states. However, it is expanding alliances elsewhere to encircle and threaten perceived enemies, while mitigating actual or potential costs resulting from its policies. One of the regions that Iranian officials and agents consider fertile ground and that the regime has been tilling for some time is the Western Hemisphere.

Iran’s first vice president Eshaq Jahangiri recently met with Venezuelan leader Nicolas Maduro. As many other Iranian leaders have done before in visits to the Americas, Jahangiri described Iranian-Venezuelan relations as “fundamental” and emphasized Tehran’s continued willingness to expand ties at all levels. Venezuela’s Ambassador to Tehran told Fars News last month that Venezuela is prepared to become a hub for Iranian exports to other Latin American nations. While the specifics may differ, this is not surprising. The Iranian regime has sought to “export” its radical ideology, using all means necessary, since the onset of its Islamist revolution.

Iranian-backed entities, such as The House of Latin America in Iran, continue to sprout throughout the region with the seemingly benign aim of “boosting relations between the Iranian people and those of Latin America.” However, their true objective appears to be promoting violence and repression and damaging U.S. interests.

The House of Latin America has hosted Nicaragua’s Daniel Ortega, a visit to Iran by the son and daughter of one of the butchers of Latin America, Che Guevara, and has translated books into Farsi by Venezuela’s Hugo Chavez and Cuba’s Fidel Castro. In fact, The House of Latin America in Iran recently announced it will be publishing a compendium of articles and other papers by the former Cuban dictator and, in conjunction with the “campaign of solidarity between Iran and Cuba,” a book on Cuba and international affairs.

The bilateral relations between these pariah states entered a new phase after a May 2001 visit by Fidel Castro to Iran. During a meeting with Supreme Leader Ayatollah Ali Khamenei, Castro declared: “Iran and Cuba, in cooperation with each other, can bring America to its knees.” For his part, Khamenei affirmed: “The United States is weak and extremely vulnerable today…US grandeur can be broken.”

International experts and the U.S. Congress have documented a decades-long systematic effort to establish clandestine intelligence stations and operatives, using official Iranian diplomatic facilities, as well as educational, religious and cultural institutions as cover for their terrorist network. And U.S. intelligence and military officials have in recent years, expressed concerns about a growing presence in Latin America, particularly in Venezuela, of members of Iran’s elite Qods Force, which spearheads Tehran’s global terrorist efforts and is involved in the regime’s missile and nuclear activities.

Networks have been uncovered operating in Latin America that benefit Iran and its partners in terrorism including narcotraffickers, smugglers of consumer goods, counterfeiters, money launderers using front businesses, exchange houses and U.S. financial institutions. In the United States, sanctions have been imposed on individuals or entities in the region believed to be violating Iran-related sanctions. Criminal action has also been undertaken when activities cross into the U.S. homeland. And investigations continue to this day. That’s the good news.

The bad news is that Latin America, as a national-security priority, barely registers with the Executive Branch when decisions are being made on strategy, assets, resources and funding to counter vital threats, such as terrorism and proliferation. The Quadrennial Defense Review for 2014, for example, placed greater emphasis on global climate change than on security developments in the Hemisphere.

Latin America and the Caribbean tend to be looked at through the prism of drugs, criminal violence or illegal immigration. Anything that challenges this myopic view, such as Iran expanding its operational reach into the region, is either ignored or the threat minimized to justify the way things have always been done. On numerous instances, U.S. agencies responsible for an avalanche of data about the transnational, cross-regional nexus between narcotrafficking, arms networks and terrorist groups, such as Hezbollah, have been marginalized and the Western Hemisphere links to these particular security risks erroneously set aside or treated solely as “law-enforcement matters.”

The Western Hemisphere, at minimum, must be integrated into broader national-security discussions.

The original 9/11 Commission report warned against compartmentalizing and ignoring potential dangers or signs of escalation. It highlighted as a key lesson from the 9/11 attacks the need to deny sanctuaries to terrorist groups. This was reaffirmed in the ten-year review released by leading members of the Commission. “Geographic sanctuaries,” the Commissioners recently stated, “enable terrorist groups to gather, indoctrinate and train recruits, and they offer breathing space in which to develop complex plots.” While referring primarily to the broader Middle East, they noted the evolution of terrorism in other areas and the need to prepare for both current and emerging threats. It is a warning that applies globally as terrorism knows no boundaries.

The Final Report of the National Commission on Terrorist Attacks Upon the United States noted a complex international terrorist operation aimed at launching a significant or “catastrophic” attack cannot do so with just anyone, at any time or from just anywhere. A number of components would be required: “time, space” for adequate planning; “a command structure…possessing the…contacts to assemble needed people, money, and materials”; “opportunity and space to recruit, train, and select operatives with the needed skills and dedication”; “a logistics network able to securely manage the travel of operatives, move money, and transport resources (like explosives) where they need to go”; “reliable communications between coordinators and operatives;” and “opportunity to test the workability of the plan.”

When it comes to Iran in the Americas, we have several starting points or events that pre-date the 09/11 terrorist attacks and help build the case that Iran and its surrogates have, or are building, the capability cited in the 9/11 report to inflict harm on the United States, our interests and allies. Seven years before 9/11, the July 18, 1994 bombing of the Argentine Israeli Mutual Association (AMIA) in Buenos Aires, Argentina clearly demonstrated that the region provided Hezbollah with all it needed to carry out a complex operation in the United States’ backyard.

Was AMIA an isolated incident or part of a broader strategy? Could the United States, Israel or regional allies have anticipated the AMIA attack? Were tripwires or warning signs missed?

On March 17, 1992, a suicide bomber drove a pickup truck filled with explosives into the Israeli Embassy in Buenos Aires. The attack was a prelude to more attacks just two years later. This explosion destroyed the embassy, a Catholic church and a nearby school building. Twenty-nine people were killed and over 200 wounded. A group identifying itself as Islamic Jihad Organization claimed responsibility for the attack, but many experts believe this group had backing from and ties to Iran and Hezbollah.

The destruction caused by the 1992 attack on Israel’s diplomatic mission would pale in comparison to the death toll and injuries that would come two years later with the AMIA bombing. Many years of meticulous investigations by Argentine prosecutors have definitively concluded that the AMIA attack was “decided and organized by the highest leaders” of the Iranian government who, in turn, “entrusted its execution to the Lebanese terrorist group Hezbollah.” It was approved in advance by: Iran’s Supreme Leader Ayatollah Ali Khamenei, Iran's then foreign minister Ali Akbar Velayati, Iran's then minister of security and intelligence Ali Fallahijan and Iran’s then so-called president, described as a “moderate” by the international media and some Western leaders, Ali Akbar Hashemi Rafsanjani.